Gamma ray bursts are among the most energetic and explosive events in the universe. They are so fleeting, lasting from a few milliseconds to about a minute that to observe them accurately has been, until now, a difficult task. Using several ground-based and satellite telescopes, among them the robotic telescope MASTER-IAC, of Moscow State University, situated in the Teide Observatory (Tenerife) an international team led by the University of Maryland (USA) and in which researchers from the Instituto de Astrofísica de Canarias (IAC) have taken part, has observed one of these explosions with unprecedented detail. The event, named GRB160625B, revealed key details about the initial phase of the gamma ray explosion and the evolution of the huge jets of matter and energy which form as a result of it.

“Gamma Ray bursts are catastrophic events, related to the explosion of massive stars, some 50 times bigger than our sun” explains Eleonora Troja, a researcher at UMD and the first author on the paper. “If we classify all the explosions in the universe by their energy, gamma ray bursts would be just less than the Big Bang. In a matter of seconds the process can emit as much energy as the sun during its whole lifetime. For that reason we are very interested to know how these phenomena occur.

The observations revealed some of the unknown details about the process in which a gamma ray explosion evolves while a dying star collapses and turns into a black hole. In the first place the data suggest that the black hole produces a strong magnetic field, which at the beginning controls the jets in which energy is emitted. Then when the magnetic field decays the matter takes control and starts to dominate the jets. The majority of specialists in gamma ray bursts thought that the jets were dominated by the matter of by the magnetic field, but not by both. Now the results of this research, to be published tomorrow in Nature magazine suggest that both factors play a basic role.

“A few seconds after the detection of a gamma ray burst by NASA’s Fermi satellite the robotic telescope MASTER-IAC began to observe this highly energetic phenomenon at visible wavelengths, which lasted only a few seconds. This allowed us to measure the polarization of the emitted radiation and in this way learn about the nature of the physical processes involved” explains Rafael Rebolo, director of the IAC and one of the authors of the article. “In the future” he adds “with the telescopes of the CTA (Cherenkov Telescope Array) to be installed on La Palma, it will be possible to observe this kind of phenomena, related to the formation of black holes, in detail at much higher energy”.

The data suggest that the synchrotron radiation-produced when electrons are accelerated along a curved or spiral trajectory- activates the initial extremely bright phase of the outburst known as the “rapid” phase. For a long time two other candidates were considered possible: black body radiation emitted by an object at high temperature, or inverse Compton radiation, which is produced when an accelerated particle transfers energy to a photon.

“Synchrotron radiation is the only mechanism which can create the degree of polarization and the spectrum which we observed at the beginning of the explosion” notes Eleonora Troja. “Our study gives convincing proof that the sudden emission of gamma rays is driven by synchrotron radiation. This is an important achievement because in spite of decades of research the physical mechanism which drives gamma ray bursts had not been precisely identified”.

Fermi, NASA’s Gamma Ray Space telescope was the first to detect the gamma ray emission from GRB160625B. Shortly afterwards MASTER-IAC, one of the network of MASTER  robotic telescopes whose Principal Investigator is Vladimir Lipunov, of Moscow State University (Russia) followed up with observations in the visible while the alert phase was still active. MASTER-IAC took data on the quantity of polarized visible light compared to the total light produced during the rapid outburst. Given that synchrotron radiation is one of the phenomena which can produce polarized light the data have yielded a crucial link between the synchrotron radiation and the initial phase of the gamma ray explosion.

A magnetic field can also influence the fraction of polarized light emitted as time proceeds, and the burst evolves. As they were able to analyze the polarization data during almost the complete burst, they could make out the presence of a magnetic field and observer how it varied while GRB160625B continued to throw out jets of matter. 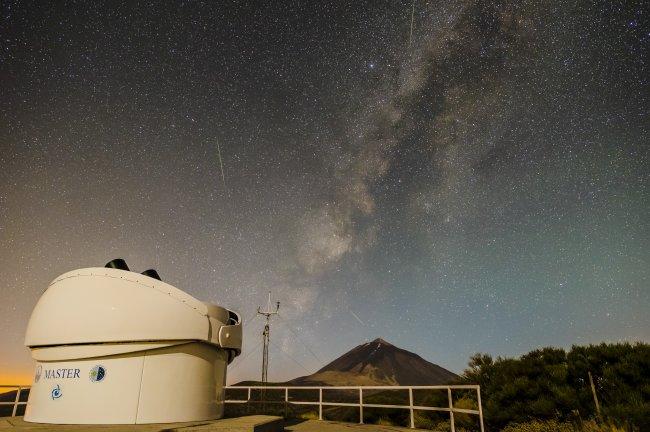