Geminids 2018, the last big meteor shower of the year 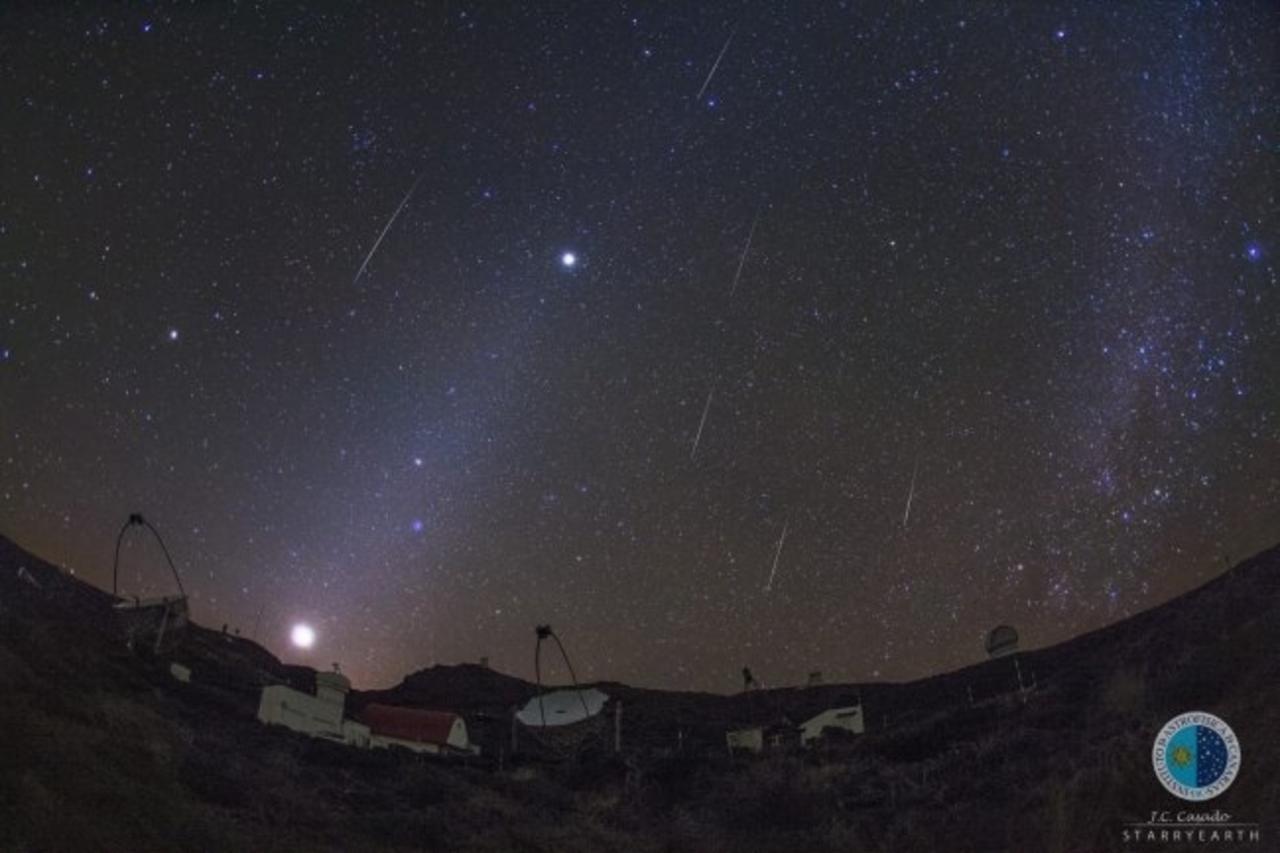 The Geminids, together with the Perseids, are the biggest meteor showers of the year. This astronomical phenomenon is produced when tiny particles of dust from fragments of comets or asteroids fall into the Earth’s atmosphere. This year the best times to see them will be during the nights of Thursday 13th and Friday 14th December, although they will be observable from 4th to 17th. The point on the sky from which the meteors appear to come, the radiant, lies in the constellation of Gemini (the twins) close to Orion. The moon, in it first quarter, will set around midnight. So observers should be able to see a meteor on average every two minutes if they are at a dark site, (free from light polution) and with a clear horizon. The Geminids can be observed from both hemisphere. In the northern hemisphere the activity will be greater, because the radiant will be higher above the horizon, but from the southern hemisphere it should still be possible to observe a large number of meteors. It is best to lie down and look steadily at an area of sky, keeping your view fixed for at least a few minutes in order to see a Geminid. The most important thing is to be  patient. Direct brodacast During the night of 14th December, from 22.30 local time (GMT +0) the Geminids will be directly observable from the Teide Observatory (Tenerife) via sky-live.tv. this channel will also broadcast direct images from the High Energy Observatory (HESS) in Nambia, and from the municipality of Olivneza (Badajoz). These three broadcasts are in the framework of Initiatives agains Light Pollution (LPI’s) of the Euroepean Project STARS4ALL. Its objective is to defend the right to a dark sky, and to denounce the negative impact of artificial light. The broadcast will enjoy the collaboration of the sky-live.tv channel and the “Extremadura Buenas Noches” initiative, of the General Directorate of Tourism of the regional government (Junta) of Extremadura. Counting stars, in the family Amateur astronomers use meteor showers to make meteor counts and send them to the International Meteor Organization (IMO) which calculates their activity rates. During the Geminids of 2018 the Instituto de Astrofísica de Canarias (IAC) and the Polytechnic University of Madrid (UPM) are collaborating in the citizen science project Contadores de Estrellas. This project, financed by the Spanish Foundation for Science and Technology (FECYT) has prepared a guide which will let any citizen collaborate in these star counts. Contadores de Estrellas aims, in a simple way, to get the general public to participate in this scientific task, using applications of mobile phones, and the didactic material prepared for the project. In addition they will run a competition via their web, whose prize will be a journey for two people to enjoy the Lirids 2019 meteor shower from the Teide Observatory. A shower with a mystery Usually the comets give birth to meteor showers, but for the Geminids this is not the case. It is thought that their origin is a small asteroid (3200) Faeton, which since its discovery in 1983 has continued to present a mystery to astonomers. In 2010 a team led by Dave Jewitt, a researcher at the University of California at Los Aneles (UCLA) using NASA’s STERO probes, that Faeton was increasing in brightness, At that time this was something new, and they decided to call it a “rocky comet” a hybrid between an asteroid and a Comet. Faeton aproaches the Sun every 1.4 years, in a similar way to a comet. The solar heat “burns” the dust residues which cover its rocky surface forming a sort of “dust tail”. “At its perihelion” explained Jewitt, (meaning its mínimum distance from the Sun as it goes around its orbit) Faeton is extremely hot, reaching some 70ºC. At that temperatura ice can no way survive on its surface, so it must have evaporated some time ago” As it is so hot, there is agreement that the most probable process is thermal decomposition. “Since 2012” comments Miquel Serra-Ricart, administrator of the Teide Observatory (OT) “ we have been following the Geminids carefully from the OT. They always give us a good show. The meteors of this shower are slower than the Perseids, so it is easier to “catch” them. In spite of the cold it is really worth observing this meteor shower” Additional Informaton “Contadores de Estrellas” is a project funded by the Fundación Española para la Ciencia y la Tecnología (FECYT) of the Ministry of Science, Innovation, and Universities. STAR4ALL is a project funded by the H2020 programme of the European Union under agreement 688135. STARS4ALL has 8 member institutions (UPM, CEFRIEL, SOTON, ECN, ESCP Europe, IAC, IGB, UCM) from 6 countries. Extremadura Buenas Noches is a project within the Night-time Strategy of the Junta of Extremadura (Extremadura 2030). Three Spanish Supercomputing centres: the Extremadura Centre for Advanced Techologies (CETA-CIEMAT), the Consotium of University Servers of Catalonia (CSUC) and the Instituto de Astrofísica de Canarias (IAC) will collaborate in the distribution of the breadcast on the web portal (sky-live.tv). Links of interest Didactic material: www.contadoresdeestrellas.org Audiovisual material: https://www.flickr.com/search/?user_id=65131760%40N06&sort=date-taken-desc&text=Geminids&view_all=1