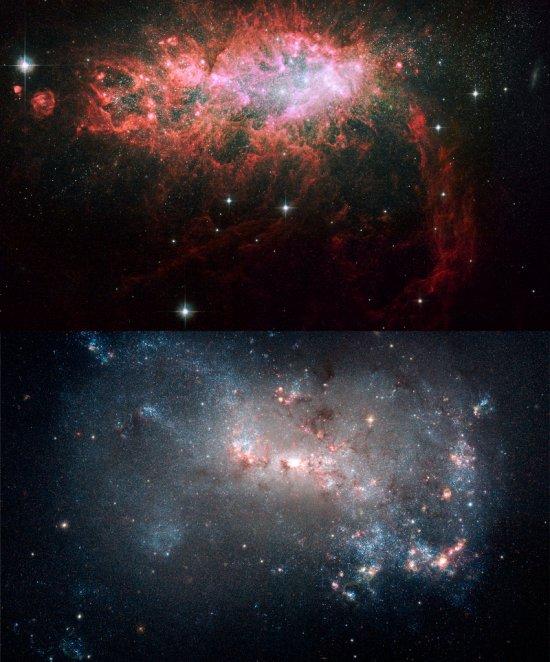 Central starbursts in galaxies are an extreme example of ongoing galaxy evolution. The outer parts of galaxies contain a fossil record ofgalaxy formation and evolution processes in the more distant past. The characterization of resolved stellar populations allows one a detailed study of these topics.

In our study we used the Hubble Space Telescope to observe the outerparts (up to 8 scale radii) of NGC 1569 and NGC 4449, two of the closest and strongest dwarf starburst galaxies in the local universe, to characterize their stellar density and populations, and obtain new insights into the structure, formation, and evolution of starburst galaxies and galaxy halos.

We detect stars in the RGB and TP-AGB (carbon star) phases in all outer fields, but not younger stars such as those present at smaller  radii. To within the uncertainties, there are no radial gradients in theRGB color or carbon-to-RGB-star ratio at large radii. The galaxies havefaint outer stellar envelopes that are not tidally truncated within the range of radii addressed by our study. The density profiles suggest thatthese are not outward extensions of the inner disks, but are insteaddistinct stellar halos.  The presence of such halos is consistent witpredictions of hierarchical galaxy formation scenarios. The halosconsist of intermediate-age/old stars, confirming the results of otherstudies that have shown the starburst phenomenon to be very centrallyconcentrated. There is no evidence for stellar-population age/metallicitygradients within the halos themselves.