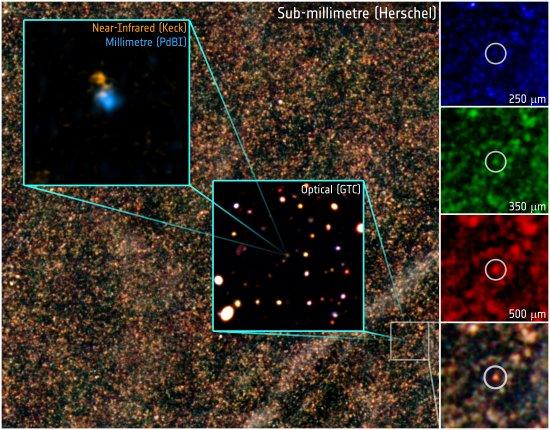 On the left, various planes show  portions of the observationsd in the three bands of SPIRE/Herschel. The red spot inside the circle is HFLS3. In the centre, another plane shows the visible image obtained with the GTC. On the right is shown emission from
Advertised on
17/04/2013

A study, with the participation of the IAC, has detected the most distant known galaxy with explosive star formation that began its production when the Universe was very young.

While the Milky Way creates one star a year, this galaxy produces around 3000 stars in the same period.

This find challenges theories explaining the formation and evolution of galaxies, which claim that a galaxy of such characteristics  could not exist so early in the life of the Universe.

The Milky Way is capable of forming approximately one star per year. The new galaxy identified in this study, in which the Instituto de Astrofísica de Canarias (IAC) has collaborated, `manufactures’ around 3000 stars in the same period of time. The significance of this gigantic star factory is that it involves the most distant known galaxy with explosive star formation, which commenced its massive production of stars when the Universe was still very young, at scarcely 6.5% of its present age. The discovery  sets a head-on challenge to theories explaining the formation and evolution of galaxies, according to which a galaxy of such characteristics should not exist so early on in the Universe. The study, which is supported by observations made with the Gran Telescopio Canarias (GTC), has been published in the latest issue of the journal Nature.