The hypergiant HR 8752 evolving through the yellow evolutionary void. 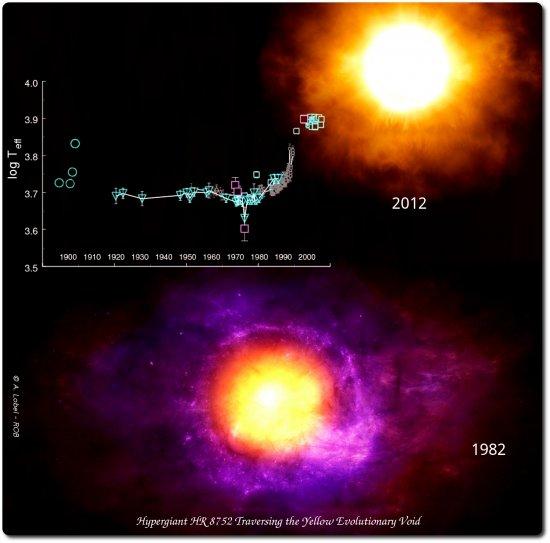 Artist’s impression of the hypergiant star HR 8752 traversing the Yellow Evolutionary Void (YEV). The image shows the increase in temperature undergone by the surface of the star in recent decades.. /© A.Lobel-ROB. SRON.
Advertised on
01/01/2012
References
Astronomy and Astrophysics, 546, 105, 2012

Context. We study the time history of the yellow hypergiant HR 8752 based on high-resolution spectra (1973-2005), the observed MK spectral classification data, B - V- and V-observations (1918-1996) and yet earlier V-observations (1840-1918).
Aims: Our local thermal equilibrium analysis of the spectra yields accurate values of the effective temperature (Teff), the acceleration of gravity (g), and the turbulent velocity (vt) for 26 spectra. The standard deviations average are 82 K for Teff, 0.23 for log g, and 1.1 km s-1 for vt.
Methods: A comparison of B - V observations, MK spectral types, and Teff-data yields E(B - V), "intrinsic" B - V, Teff, absorption AV, and the bolometric correction BC. With the additional information from simultaneous values of B - V, V, and an estimated value of R, the ratio of specific absorption to the interstellar absorption parameter E(B - V), the "unreddened" bolometric magnitude mbol,0 can be determined. With Hipparcos distance measurements of HR 8752, the absolute bolometric magnitude Mbol,0 can be determined.
Results: Over the period of our study, the value of Teff gradually increased during a number of downward excursions that were observable over the period of sufficient time coverage. These observations, together with those of the effective acceleration g and the turbulent velocity vt, suggest that the star underwent a number of successive gas ejections. During each ejection, a pseudo photosphere was produced of increasingly smaller g and higher vt values. After the dispersion into space of the ejected shells and after the restructuring of the star's atmosphere, a hotter and more compact photosphere became visible. From the B - V and V observations, the basic stellar parameters, Teff, log M/Msun, log L/Lsun, and log R/Rsun are determined for each of the observational points. The results show the variation in these basic stellar parameters over the past near-century.
Conclusions: We show that the atmospheric instability region in the HR-diagram that we baptize the yellow evolutionary void actually consists of two parts. We claim that the present observations show that HR 8752 is presently climbing out of the "first" instability region and that it is on its way to stability, but in the course of its future evolution it still has to go through the second potential unstable region.