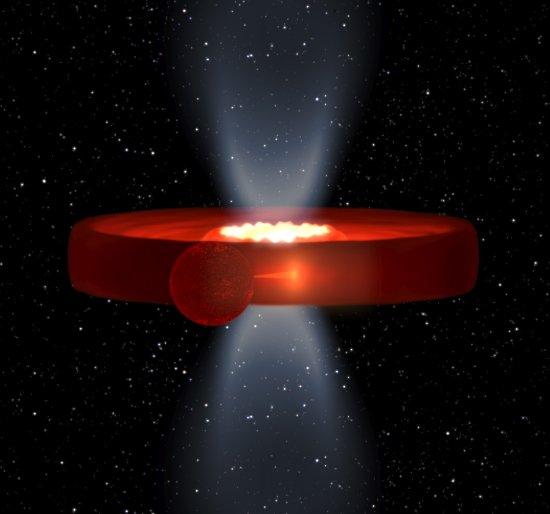 Edge-on view of the accretion disc, as seen from the Earth. A raised structure (like a donut), seen in the interior, causes the light from the inner parts of the disc (those closest to the black hole) to be eclipsed. This 'donut' gyrates around the black
Advertised on
28/02/2013

Like an immense donut (or toroid) that expands daily. That's how Jesús Corral-Santana, a researcher at the Instituto de Astrofísica de Canarias (IAC), describes the odd - hitherto unknown - structure of the binary system Swift J1357.2-0933, consisting of a 'normal' star and a stellar-mass black hole (which feeds off its companion star). The investigation, just published in Science journal with Corral as first author, follows the stages of the outburst of the system, an event that occurs only once in decades or centuries.

The team observed strange eclipses in the system that lasted and were repeated every few minutes. This finding led them to two conclusions: they had to be viewing the black hole edge on (it had an inclination of at least 75 degrees) and it presented an odd vertical structure within the accretion disc of the system. In other words, the matter being drawn from the companion star formed an outflow in the shape of a whirlpool, rather like water flowing down a plughole.

As Jorge Casares, also an IAC researcher, coauthor of the paper and Principal investigator (PI), explains, 'this kind of structure is possibly present in many - or all - X-ray binaries, the class of systems to which Swift J1357.2-0933 belongs. So the object we've observed could be the prototype of a hitherto hidden population of highly inclined systems in which the black hole is obscured.' Statistically, around 20% of systems could be of this type.

Black holes are formed following the death of very massive stars, and their detection is complicated. 'Since they don't emit any light, they're nearly impossible to find if they are alone,' says Casares. 'In cases where they have a companion star, their probability of detection is much higher, since their presence is betrayed by the "cannibalization" of the companion star by the black hole.' This explains why, since the first detection of such a system in 1964, only 18 other black holes have been found in our Galaxy. Swift J1357.2-0933, discovered by the Swift X-ray satellite and studied by the IAC team, is the latest one in the list. There are a further 32 black-hole candidates, but these haven't yet been confirmed.

Many X-ray binaries are characterized by decades-long - even centuries-long - periods of quiescence, and it is easy to confuse them with normal stars when in this state. But, with no prior warning, these system can erupt, brightening dramatically (by as much as a million times their normal brilliance), in any part of the Galaxy. This enables them to be detected by satellites scanning the sky in X-rays. The system fades back to quiescence after a few months.

It's then, adds Corral-Santana, that the scientific community can analyse its structure: a 'normal' star and a compact object (either a black hole, as in this case, or a neutron star). The star transfers material to its companion, forming an accretion disc.

In the case of Swift J1357.2-0933, the IAC researcher continues, more data have been gathered owing to its relative proximity, estimated at 5000 light years and its great distance above the plane of the Milky Way, where most of the matter of the Galaxy is concentrated, meaning that light from the binary system is not dimmed by interstellar dust or glare from nearby stars.

The scientists found that the system has a very short period, a mere 2.8 hours. In that time the companion star completes an orbit around the black hole. They also measured the mass of the black hole to be three times that of the Sun. 'That's a lower limit. In fact, the mass could be very much greater than that. Further observations during the period of quiescence would enable us to get a more accurate value,' Corral-Santana explains.

However, the most unusual find concerns the eclipses of the system. From images taken with various telescopes at the Teide and Roque de los Muchachos Observatories (the IAC-80, Liverpool, Mercator and INT), it was found that eclipses occurred in which the brightness of the system dropped by 30% in only seven seconds, and that they were repeated at longer intervals after a few days. 'It's the first time a phenomenon with these characteristics has been observed. None of the 50 known transitory X-ray binaries (18 with confirmed black holes and 32 candidates)
produces eclipses by the companion star,' the IAC astrophysicist points out.

This discovery is closely linked with another: 'The simple fact of detecting the eclipses indicates that the system is viewed at a high inclination, even greater than 75 degrees. In effect, we're looking at it edge on,' says the scientist, who further describes the structure as, 'probably like a donut, with the black hole permanently hidden in the middle.'

Descripcion: Representation of the X-ray binary Swift J1357.2-0933, consisting of a red (type M) star orbitting a black hole surrounded by an accretion disc. The upper panel helps to interpret the morphology of the system, although we are really viewing it edge on. The star completes an orbit about the black hole every 2.8 hours.

In the edge-on view can be seen a raised structure (like a 'donut') in the accretion disc that produces eclipses of the light from the inner parts of the disc (those closest in to the black hole). This 'donut' orbits the black hole every few minutes repeatedly in more or less regular intervals, as can be seen in the graph (upper left).

After a few days, the 'donut' expands and propagates like a wave in the accretion disc. The duration of the eclipses consequently lengthens since it is now farther away from the black hole, as can be seen in the upper right graph.