The impact of the Kasatochi eruption on the Moon's illumination during the August 2008 lunar eclipse. 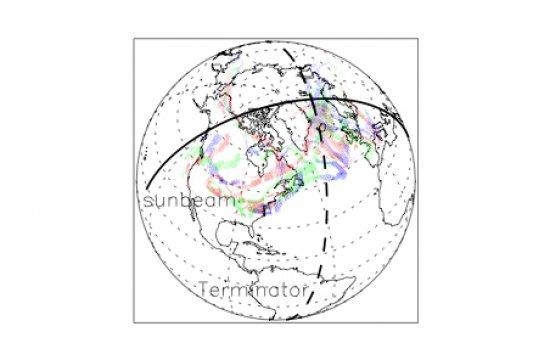 Footnote: Projected mid-section trajectory of the sunbeam that reaches the lunar disk targeted by the telescope at 21:36UT on 16 August 2008. Overplotted, the SO2 cloud (a usual volcanic cloud tracer) on 15, 16 and 17 August (red, green and blue, respecti
Advertised on
01/01/2011
References
Geophysical Research Letters (in press)

The Moon's changeable aspect during a lunar eclipse is largely attributable to variations in the refracted unscattered sunlight absorbed by the terrestrial atmosphere that occur as the satellite crosses the Earth's shadow. The contribution to the Moon's aspect from sunlight scattered at the Earth's terminator is generally deemed minor. However, our analysis of a published spectrum of the 16 August 2008 lunar eclipse shows that diffuse sunlight is a major component of the measured spectrum at wavelengths shorter than 600 nm.

The conclusion is supported by two distinct features, namely the spectrum's tail at short wavelengths and the unequal absorption by an oxygen collisional complex at two nearby bands. Our findings are consistent with the presence of the volcanic cloud reported at high northern latitudes following the 7-8 August 2008 eruption in Alaska of the Kasatochi volcano. The cloud both attenuates the unscattered sunlight and enhances moderately the scattered component, thus modifying the contrast between the two contributions.