Jean-Michel Jarre: "The extraordinary landscapes of the Canary Islands are very inspiring to my music" 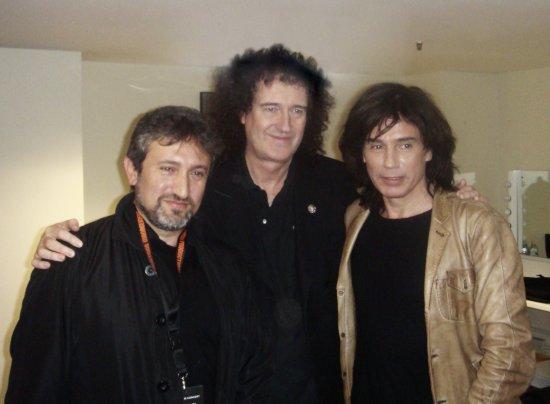 The Music of the Stars's team. From right to left, Jean-Michel Jarre, Brian May and Garik Israelian in the backstage of the Royal Albert Hall, London.
Advertised on
14/07/2008

The French composer and performer Jean-Michel Jarre, known worldwide as one of the pioneers of electronic music, has visited the Observatories of Tenerife and La Palma in search of inspiration needed to complete the preparation of the concert "The Music of Stars". This  important cultural event, informative and musical, which will stage the domes of  Roque de los Muchachos Observatory  (La Palma), is part of the activities of the Instituto de Astrofisica de Canarias (IAC) for the next 2009,  along with the inauguration Gran  Telescope Canarias (GTC).

At the request of the International Astronomical Union, 2009 has been declared by UNESCO as "International Year of Astronomy" (IYA2009) and is to commemorate the fourth centenary of the use of the first telescope by  the astronomer Galileo Galilei. In this context, Jean-Michel Jarre has been invited by the IAC astrophysicist. Garik Israelian, a researcher at the IAC and promoter of the concert, to study the Roque de los  Muchachos Observatory and the Teide Observatory  to discuss  the projects production and realisation.

The show aims to link music and astronomy. Israelian believes that "the two go together since the time of Aristotle, since the theory of The Music of the Spheres suggested that celestial bodies emit harmonical sounds. It is time to celebrate this union." The researcher also has the support of Brian May, guitarist of the legendary group Queen and personal friend of Israelian, and also the first of the musicians involved in the project. "You could say that Brian May holds a special place in his heart for the Canaries for many years," says the researcher from the IAC.

Garik Israelian and Brian May recently invited Jean-Michel Jarre to form part of the team to develop the concert "The Music of the Stars" on the island of La Palma. The French musician has joined the initiative with enthusiasm. "The project of Dr. Garik Israelian to approach astrophysics through acoustic astronomy is something that excited me a lot as an artist. I must say that this concept and show linked to Space is a project of a lifetime - my music has often been associated with Space", said the pioneer of electronic music during his first visit a few weeks ago.

Jarre's large outdoor concerts have a singular signature and are renowned worldwide  for their impressive visual impact : he has a unique talent of integrating the landscape or the surrounding architecture into a spectacular scene without infringing upon the nature  of the environment. He deploys state-of-the-art technology in lighting, lasers and  fireworks, with local musicians, orchestras and choirs. He created spectacular events in landscapes accross the planet including  Unesco  World Heritage Sites -  the "Millennium Concert" held in 1999 at the Great Pyramids of Egypt, The Forbidden City in Beijing. The skylines of Paris and Houston  have also become scenes for his performances.

In the music of Jean-Michel Jarre, who rose to fame with the international success of his album Oxygene, cosmic sounds reminiscent of ancient stars and planets, have always been present.  In this sense, Jarre has expressed fascination for the lunar Canary landscape. "The visit has been most inspiring for the concert project. The Canary Islands have one of the most extraordinary landscapes in the world. If the Roque de los Muchachos Observatory seemed a pleasant lunar landscape, the Teide and its environs seem to belong to a distant planet".

"The Music of the Stars is much more than just a show. Our intention is to create a civic event open to everyone, either live, via  television or the Internet," said French musician. Jean Michel Jarre, UN Ambassador for Unesco for over 15 years has been asked by Unesco to be Goodwill Ambassador for the forthcoming IYA2009.

For his part, Brian May states that "we will create something new and  different for this event." After several years away from the stage,  the writer of "We will rock you" and "The show must go on" decided to  resume his studies in astrophysics and obtained his doctorate last  year at Imperial College with a thesis entitled " Radial Velocities in the Zodiacal Dust Cloud. " In July 2007 Dr. May was invested Chancellor of  the University of Liverpool John Moores.