The largest known molecules in space are not produced in hydrogen-poor environments. 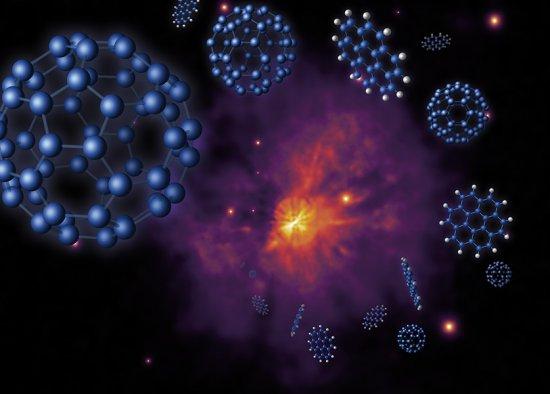 Artistic composition of the fullerenes and polycyclic aromatic hydrocarbons found in a R Corona Borealis star rich in hydrogen. The non-detection of these molecules in the vast majority of very hydrogen-poor R Coronae Borealis stars contradicts the terres
Advertised on
01/01/2011
References
(2011) Are C60 molecules detectable in the circumstellar shells of R Coronae Bo…

The largest known molecules in space, fullerenes, do not occur in hydrogen-poor environments as previously thought.

Fullerenes are very stable molecules and difficult to destroy, they have a structure very similiar to that of a soccer ball and made of 60 carbon atoms arranged in three-dimensional spherical structures and patterns of alternative hexagons and pentagons. These molecules were synthesized in the laboratory by chemists Harold Kroto and Richard Smalley, who thus received the 1996 Nobel Prize in Chemistry. Kroto and Smalley, according to the laboratory experiments, believed that these molecules can not form in a place that has hydrogen, because the hydrogen would inhibit their formation, and they proposed the stars with very little hydrogen - the so-called R Coronae Borealis stars - as an ideal environment for their formation in space.

In a work published last year was shown by observations made with Spitzer Space Telescope, NASA, that fullerenes were in stars with a lot of hydrogen, which contradicted what was believed. With the new research it is shown that these molecules do not occur in stars with little hydrogen, which contradicts the laboratory studies. These results tell us that fullerenes are much more abundant than previously believed, because they are formed in "normal" and not "rare" environments. Furthermore, this discovery may help to the identification of the molecules responsible for the diffuse interstellar bands, one of the great mysteries in astrophysics.

The current observations have changed our understanding of the formation of fullerenes, suggesting that these molecules are produced from the decomposition of hydrogenated amorphous carbon grains when they are irradiated by ultraviolet radiation or by collisions of gas. Thus, the hydrogenated amorphous carbon grains are vaporized, producing an interesting chemistry where fullerenes and polycyclic aromatic hydrocarbons are formed - the latter molecules are formed by carbon and hydrogen with a variety of sizes.

Fullerenes have been found on Earth and meteorites and now in space, and can act as "cages" and bring in other molecules. Some theories suggest that the fullerenes may have carried the Earth substances that make life possible.