The transit of the planet will take place next Monday, November 11, from 12: 36h to 18: 04h. It will last almost five and a half hours, and will be broadcast entirely and live from the Canary Islands Observatories.

Transits of the Inner Planets - Venus and Mercury - are rarer than the eclipses of Sun and Moon. On average we will have 13 transits of Mercury per century. The last transit of Venus was June 2012. We had transits of Mercury in the years 2003, 2006 and 2016 and the next one will not occur until 2032.

Few readers of this article will have seen Mercury, a very small planet. Ganymede, one of the four Galilean moons around Jupiter, and Titan, the largest moon of Saturn, are larger. We can see Mercury with the naked eye, looking like a star at sunrise or sunset, always close to the Sun, since its orbit is quite close to our star. It is an extreme and strange planet, where the Sun can rise twice the same day, and where its surface temperature can range between 450 and -170 ° C.

Due to its small size and remoteness, until the invention of the telescope it was impossible to observe a transit of Mercury. The first observations with a telescope were made by Galileo Galilei in the seventeenth century. Its size and brightness vary significantly depending on its position in the orbit. When it passes in front of the Sun, we see it with its maximum apparent size (between 10 and 13 arc seconds), while just before crossing behind the Sun we see it with its minimum size (about 4.5 arc seconds). For comparison the disc of the Sun and the Moon measure some 2,000 arc seconds. Our visual resolution limit is about 60 arc seconds, so it is impossible to see a transit of Mercury without the help of a telescope. It was Johannes Kepler who first predicted that a transit of Mercury would take place on November 7, 1631. He did not live to see it, but this information was used by Pierre Gassendi to be the first to observe one of those "transits" of the planet in front of the sun.


When it comes to observing the Sun, you must be very careful to avoid its dangers. We must never observe it with the naked eye,( even less with instruments) without taking the correct precautions. Observing a transit is as dangerous as directly observing the Sun, since the planet will not cover a significant part of it. Incorrect observation of the Sun can permanently damage our retina or even blind us. The recommended methods are observation by projecting the solar disk on a screen or by telescopes equipped with the appropriate solar filters.

The Institute of Astrophysics of the Canary Islands (IAC) offers the following options for following the phenomenon. Through the YouTube channel IAC Vídeos of the Astrophysics Institute of Canaries. It will also be broadcast by the Nazionale Galileo Telescope (TNG), from the ORM.

The European initiative EELabs, through the sky-live.tv, will broadcast live the full Mercury transit, connecting with the several telescopes of the Canary Observatories and explaining  the phenomenon in detail, 6 in collaboration with the QuantumFracture scientific dissemination channel, to from 12:30 UT.

We tern "transit"  the passage of one object in front of another, so that the nearer hides a part of the surface of the farther. For example, it is possible to observe an ISS transit in front of the Sun. In the Solar System, only the inner planets (Mercury and Venus) can transit the Sun from our point of view on Earth.

Mercury rotates in a rather elliptical orbit, completing a revolution around the Sun in approximately three Earth months (88 days), during which time the Earth has moved around a quarter of its orbit. Therefore, Mercury will lie between the Sun and Earth after 116 days, so that this alignment is repeated about three times a year. We can try to visualize this effect thinking about the minute hand of a clock, which takes 65 minutes to reach the hour hand. So why don't we see three transits of Mercury a year? Mercury moves in a plane that forms an angle of 7 ° with the Earth's orbital plane around the Sun and so that the three bodies are sufficiently aligned, both planes must coincide. Otherwise, Mercury will pass above or below the solar disk. To simplify, we can imagine two concentric circles that represent the orbits of Mercury and the Earth (the Sun is their centre) painted on the page of a notebook. Now let's raise the page slightly: that is the orbital plane of Mercury, while that of the Earth is horizontal. The two sheets (planes) intersect along a line, which will coincide with two dates of the year on the Earth's path. In the case of Mercury in 2019 May 8-9 and November 10-11; If a few days before or after that date  there is a passage of Mercury in front of the Sun, there will be transit. There is a certain periodicity in these phenomena, although it obeys complex rules. It is clear that it has to be a multiple of the 116 days it takes to match the alignment between Mercury and Earth. This occurs on average about 13 times per century, at intervals ranging from 3.5 to 13 years. The next transit of Mercury, after this November 11, 2019, will be on November 13, 2032.

During a transit we can pick out five key moments. The first, when the planet's disc touches the sun's luminous disc (the first contact); the second, when it has completely entered the sun's disc (second contact). The third is with Mercury right in the middle, where the distance between the planet and the centre of the Sun is a minimum. In a similar way to the entrance, but in reverse order, the “exit” is the  period between the  contact of the outer edge of the planet with the inner edge of the disc of the Sun, (third contact)  until it just leaves the solar disc entirely (fourth contact).. The precise moments of observation of each of these events depend on the position of the observer on Earth, and may vary within a couple of minutes. Regarding the geocentric position, these are: 12:35, 12:37, 15:19, 18:02 and 18:04 (all in Universal Time - UT. They must be corrected for each hourly use). Miquel Serra-Ricart, astronomer at the Institute of Astrophysics of the Canary Islands (IAC) comments: “The transit of Mercury is a good opportunity to organize educational activities in schools. It is a simple phenomenon to observe, but governed by fundamental laws of Physics. It is important to remember again that the observation must be carried out following strict safety measures so that the Sun does not harm our eyes”.

“Transits in the Solar System are unusual phenomena in Astronomy. If Mercury's seems infrequent to us, the rarest one is Venus, which will not transit the Sun until 2117, with the additional inconvenience of not being able to observe it from the Canary Islands because it will occur during the night (it will be observable from the other half of the planet ) ”, Says Alfred Rosenberg, an astrophysicist in the outreach unit of the IAC.

But transits are more fashionable than ever. Considering that our galaxy is made up of hundreds of billions of stars, most of them with planets spinning around them, it is only a matter of time (although we need super-powerful and precise instruments) to get to observe them. In recent years thousands of exoplanets have been discovered, planets that revolve around other stars. Of these, as of today, 2,965 planets have been detected using the transit method, of which 482 are part of multiple planetary systems. From the precise,repeated, measurement of the decrease in brightness (the light curve) we can determine the orbital period, the size of the planet and other values ​​that allow us to know the mass, volume, (density), orbital parameters, etc., which in turn allow us to establish the "habitability" of the  planet observed. Something that seemed to be science fiction a few decades ago is becoming a reality: we are getting closer to finding a twin of our planet.

Seen from any other star, Mercury would hide only one in 85,000 photons of the Sun. A planet as small as Mercury would be at the limit of being able to be detected by the transit technique with current instrumentation. Somewhat larger planets, such as Earth, are being detected today.

Three Spanish Supercomputing Centres, The Extremadura Centre for Technological Advances (CETA-CIEMAT), the Consortium of University Servers of Catalunya (CSUC) and the Institute of Astrophysics of the Canary Islands (IAC) will collaborate in the distribution of the web portal broadcast (sky-live.tv).

EELabs (eelabs.eu) is a project funded by the INTERREG V-A MAC 2014-2020 Program, co-financed by the European Union ERDF (European Regional Development Fund), under contract number MAC2 / 4.6d / 238. In EELabs work 5 centres of Macaronesia (IAC, ITER, UPGC, SPEA-Azores, SPEA-Madeira). The objective of EELabs is to create Laboratories to measure the Energy Efficiency of Night Artificial Lighting in natural protected areas of.

Figure 2. Visibility map of the Mercury Transit of November 11, 2019. Image from Google and Xavier M. Jubier .

Figure 3. Last transit of Mercury (May 2016) observed simultaneously from Iceland and Tenerife by the STARS4ALL project. Due to the large separation of the observation points there is a parallax - displacement - in the position of Venús on the solar disk (creditos: J.C. Casado, STARS4ALL). Alta resolución.

Figure 4. Last transit of Mercury visible from Europe. The observation was made from Iceland. The succession of points are the planet Mercury while near the center of the solar disk you can see a sunspot. (creditos: J.C. Casado, STARS4ALL). Alta Resolución. 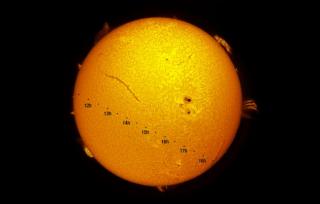