Narrow Band Halpha photometry of the super-Earth GJ 1214b with GTC/OSIRIS tunable filters. 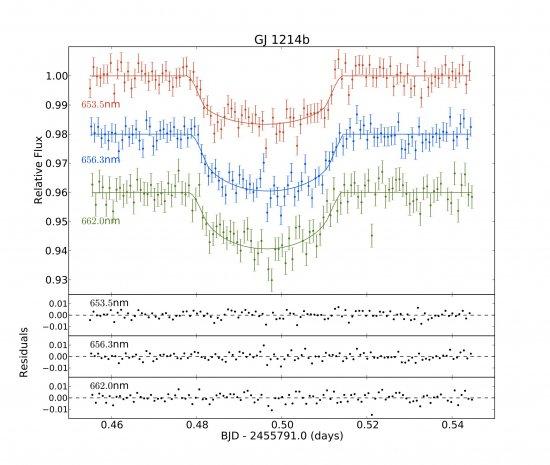 Aims. The super-Earth planet GJ 1214b has recently been the focus of several studies, which use the transit spectroscopy technique to determine the nature of its atmosphere. Here, we focus on the Halpha line as a tool to further restrict the nature of GJ 1214b’s atmosphere.

Methods. We used the Gran Telescopio Canarias (GTC) OSIRIS instrument to acquire narrow-band photometry with tunable filters. We were able to observe the primary transit of the super-Earth GJ 1214 in three bandpasses: two centered in the continuum around Halpha (653.5 nm and 662.0 nm) and one centered at the line core (656.3 nm). We measure the depth of the planetary transit at each wavelength interval.

Results. By fitting analytic models to the measured light curves, we were able to compute the depth of the transit at the three bandpasses. Taking the difference in the computed planet-to-star radius ratio between the line and the comparison continuum filters, we find ∆Rp/Rs = (6.60 +/- 3.54)x10-3 and ∆Rp/Rs = (3.30 +/- 3.61)x10-3 . Although the planet radius is found to be larger in the Halpha line than in the surrounding continuum, the quality of our observations and the sigma level of the differences (1.8 and 0.9, respectively) do not allow us to claim an Halpha excess in GJ 1214’s atmosphere. Further observations will be needed to resolve this issue.