A new key to solving the mystery of the diffuse interstellar bands. 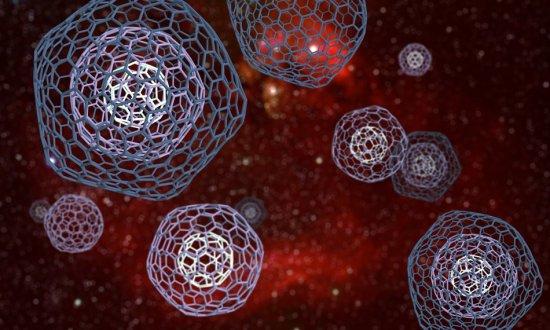 Artist's impression of complex fullerenes (carbon onions or multishell fullerenes such as C60@C240 and C60@C240@C540) produced by a planetary nebula and expelled into the interstellar medium. The connection between these molecules and certain diffuse inte
Advertised on
01/01/2013
References
2013, García-Hernández & Díaz-Luis 2013, A&A, 550, L6

We have found evidence that the presence of ‘carbon onions’ and other large molecules derived from fullerene could be commonplace in space. These are the most complex molecules detected so far and their discovery has important implications regarding our understanding of circumstellar and interstellar physics and chemisty, as well as of molecular processes in the final stages of stellar evolution. The work also provides new insights into understanding the origin and composition of the so-called diffuse interstellar bands (DIBs), one of the most enigmatic phenomena in astrophysics. Discovered 90 years ago, DIBs are found in every direction in space (more than 400 are known). They are more intense in areas of abundant interstellar dust and are characterized by their absorption of part of the visible light emitted by stars. By examining the optical spectrum of two planetary nebulae, we have found that two known DIBs seemed particularly intense, and that a hitherto unknown band appeared. The observations concur with earlier theoretical studies on large and complex fullerenes (carbon onions or multishell fullerenes such as C60@C240 y C60@C240@C540) and their hypothetical behavior in space. The fullerenes in their multifarious manifestations (carbon onions, fullerene clusters, or even complex species formed by fullerenes and other molecules like hydrocarbons, or atoms) could hold the key to solving the mystery of the DIBs. It has been suspected for some time now that DIBs could be generated by carbon-based molecules. The new study confirms this theory and also identifies a particular class of carbon molecule, complex fullerenes (carbon onions or multishell fullerenes).