NGC1277: a massive compact relic galaxy in the nearby Universe. 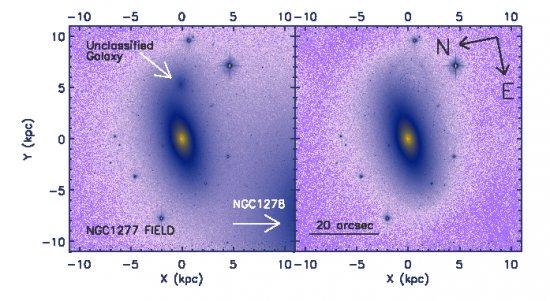 The neighborhood of NGC1277 as seen by the HST F625W filter. The left panel shows the two closest galaxies whose light contaminate  NGC1277.  The right panel shows NGC1277 after the subtraction of the contaminant light.  The results indicates that NGC1277
Advertised on
01/01/2013
References
http://adsabs.harvard.edu/abs/2013arXiv1310.6367T

As early as 10 Gyr ago, galaxies with more than 10^11 M_sun in stars already existed. While most of these  massive galaxies must have subsequently transformed through on-going star formation and mergers with other galaxies, a small fraction (<0.1%) may have survived untouched till today. Searches for such relic galaxies, useful windows to explore the early Universe, have been inconclusive to date: galaxies with masses and sizes like those observed at high redshift (M_*>10^11 M_sun; R_e<1.5 kpc) have been found in the local Universe, but their stars are far too young for the galaxy to be a relic galaxy. This paper explores the first case of a nearby galaxy, NGC1277 (at a distance of 73 Mpc in the Perseus galaxy cluster), which fulfils many criteria to be considered a relic galaxy. Using deep optical spectroscopy, we derive the star formation history along the structure of the galaxy: the stellar populations are uniformly old (> 10 Gyr) with no evidence for more recent star formation episodes. The metallicity of their stars is super-solar ([Fe/H]=0.20+-0.04 with a smooth decline towards the outer regions) and alpha enriched ([alpha/Fe]=0.4+-0.1). This suggests a very short formation time scale for the bulk of stars of this galaxy. This object also rotates very fast (V_rot~300 km/s) and has a large central velocity dispersion (sigma>300 km/s).  NGC1277  allows the explorations in full detail of properties such as the structure, internal dynamics, metallicity and initial mass function at ~10-12 Gyr back in time when the first massive galaxies were built.