The Minister of Science, Innovation and Universities, Pedro Duque, accompanied by the President of the Government of the Canary Islands, Fernando Clavijo (left) and the director of the Instituto de Astrofísica de Canarias, Rafael Rebolo (right). Credit: I
Advertised on
10/07/2018

The scientific output of the IAC will be able to continue at the Forefront of the world in Astrophysics” Pedro Duque, the Minister for Science Universities and Innovation gave this assurance at the press conference following the meeting of the Governing Council of the IAC, where he was accompanied by the President of the Canary Government, Fernando Clavijo, and the Director of the IAC Rafael Rebolo. At the meeting information was presented about the activity of the IAC in 2017 as well as the Strategic Plan for the Canary Island Observatories, with projects for future large telescopes, which imply significant investments in the Islands in the coming years. “At this meeting” the Minister added “We were also given an additional report by the University of La Laguna, about the economic impact by astrophysics, and by this Institute, on Society in the Canaries”. The report shows that for every euro invested in Astrophysics by the various administrations, at least 4 euros are generated in the gross domestic product of the islands.

Fernando Clavijo pointed out, during the meeting, that the Canary Government had provided funding for the IAC, and for the setting up of the different observatories and their instruments, including the Gran Telescopio Canarias, in the sum of over 45 million euros from 2014, and projecting to 2021. “The IAC places the Canaries as one of the key centres of research in the field of Astrophysics. The excellent astronomical quality of our skies makes the IAC’s Observatories a global astronomical reserve, open to the international scientific community since 1979, which can be considered as putting into practice the transversal concept of a Natural Laboratory in the RIS3 of the Canaries”

In addition the Canary President explained that “This has place the Canaries in the sights of those who want to establish the most advanced scientific infrastructure in the field of Astrophysics, such as the European Solar Telescope (EST) the “Liverpool Robotic Telescope /LT2) and the network of telescopes for high energies, the “Cherenkov Telescope Array (CTA)” among others. In the near future the “Thirty Meter Telescope (TMT)” might be added to these projects and this would be a unique opportunity to improve the technological capacity linked to astrophysical research, an impulse for the development of a diversified economy in the Canaries, with the creation of technologically based companies and the possibility of bringing larger companies in this sector to the islands, as well as the talents of qualified personnel, and these are factors which will make a positive impact on the socioeconomic development of our region”

As for the budget, an increment of 8% in the Budget of the IAC for 2019 was approved, subject to overall budgetary availability. Pedro Duque then went on to say “We have talked about the stabilization of the staff, the restructuring of a number of staff positions, in order to offer the Institute good perspectives for the future and sufficient flexibility. Staff stabilization is usually one of the first claims or deficiencies which one has to improve, and of course we will continue to give support internationally to the countries which want to site their installations either on La Palma or Tenerife. We will take into account all the international contacts”.

A meeting with the researchers

Before the start of the meeting of the Governing Council the Minister made a tour of the installations of the Institute, and had an informal meeting with the research personnel at which views about the Spanish scientific system were exchanged. Opinions were presented about the long term funding of instrumentation projects, the stabilization in post of the postdocs who have returned to Spain under the Ramón y Cajal programme, and the removal of bureaucratic blockages, especially in purchasing and in work contract. Pedro Duque put a high value on his visit stating that “The impression I take away is of a highly motivated staff with very high capabilities. I am also looking at all of the possibilities of technological development which are being carried out at this Institute, very interesting from the point of view of the scientific development of the country. We must give them their due value. We will see how this technological development can be used in the future”

Strategic Plan for the Canary Observatories

This plan describes the strategic direction, the objectives, and the priorities that the IAC will follow in order to make its vision of the future a practical reality. Three strategic objectives have been identified: leadership, international activity, and innovation, to strengthen the capacity of the Canary Observatories to carry out their mission and to keep Spain in the forefront of research in Astrophysics, and in related technological development. In order to achieve this it will be necessary to set in action a plan which will aim for the following six specific strategic objectives in the period 2017-2021: facilitate top level astrophysical research at world level, improve the scientific and technological capacity of the Observatories, including the collaborative development of instrumentation, continue to improve the quality and the quantity of the services and supporting infrastructure of the Observatories, protect the quality of the sky and the environment, and strengthen the capabilities in science technology and engineering, as well as improving social awareness.

“This strategic plan” explained Rafael Rebolo, “is aimed at improving the basic infrastructure of the Observatories, and improving the possibilities of the arrival of new frontline scientific installations. It foresees the participation of the Institute in technical developments for these major telescopes, improvements of many types, in Access, in electrical supply, making the Observatories increasingly respectful of the environment…, to summarize, everything which is implied in an major scientific infrastructure such as the Canary Observatories, and which needs present and future planning. This proposal has been presented at this meeting, but it is subject to rigorous evaluations which will be performed by international commissions and whose result will be given to us by the Ministry

After the press conference the Minister of Science, Innovation and Universities held a meeting via videoconference with the Director of the Thirty Meter Telescope (TMT) project, to demonstrate the support of his Ministry and of the other relevant Administrations for the installation for the TMT on La Palma. “We will all work together for the success of the project if a decision is made to install it on La Palma” stated Pedro Duque.

The annual meeting of the Governing Council of the IAC, presided over by the Minister for Science, Universities and Innovation, Pedro Duque, there were present the President of the Canary Government, Fernando Clavijo, the Director General of Policy for Research, Development, and Innovation, Clara Eugenia García, the Delegate of the Government in the Canaries, Elena Máñez, the Councillor for Economy, Industry, Commerce and Knowledge of the Canary Government, Pedro Ortega, the Rector of the University of La Laguna (ULL) Antonio Martinón, the acting president of the Cabildo of Tenerife, Aurelio Abreu, and the President of the Cabildo of La Palma, Anselmo Pestana.

The Observatories of the Instituto de Astrofísica de Canarias (IAC) and the Gran Telescopio CANARIAS (GTC) are part of the network of Singular Scientific and Technical Infrastructures (ICTS), of Spain. 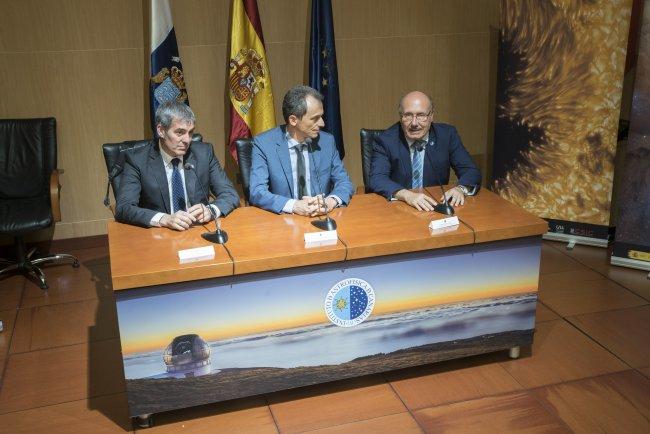