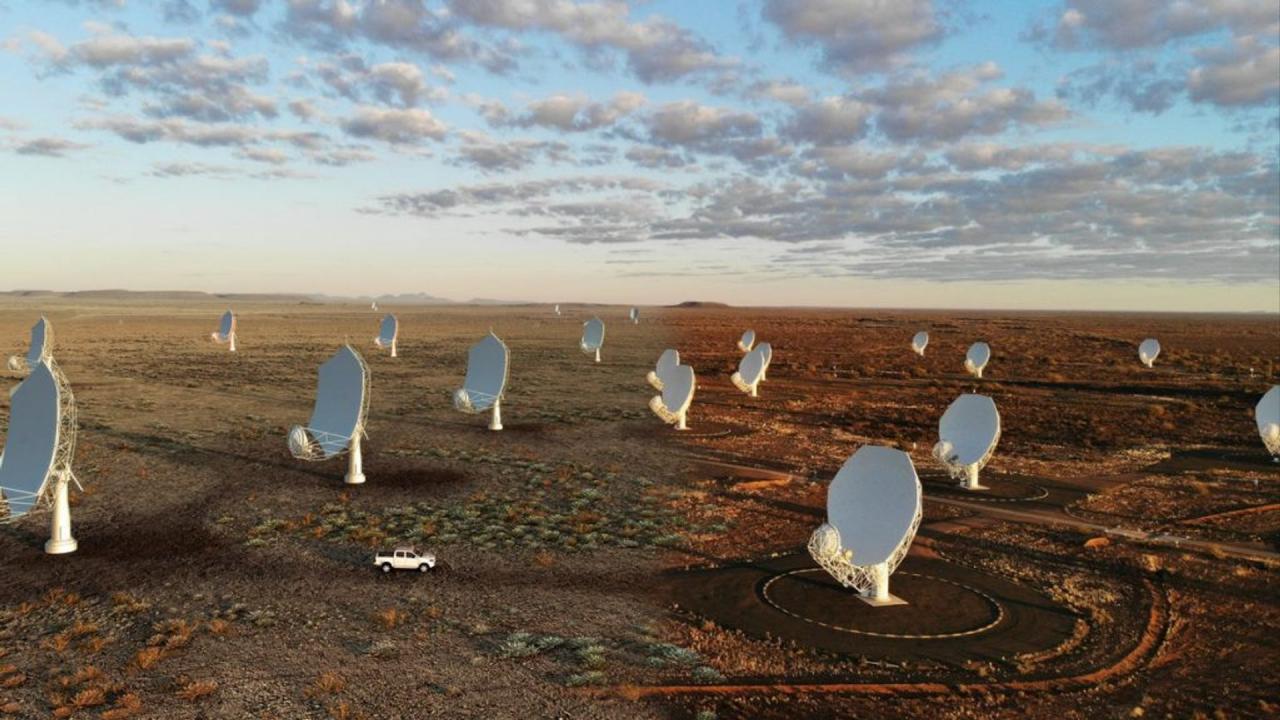 An international team of researchers demonstrated the capability of the Square Kilometer Array (SKA) to detect radio emission from normal spiral galaxies in the early universe. Soon, the SKA, whose construction has begun this year, will be the World’s largest radio telescope. The astronomers, who belong to the SKA Science Working Group “Extragalactic Continuum”, are looking for a way to probe a cosmic era when star formation activity suddenly dropped after an epoch known as the “Cosmic Noon”. For this, they simulated the physical properties of the interstellar medium of galaxies similar to the Triangulum Galaxy (M 33) and the Whirlpool Galaxy (M 51) at early ages. The results show that potential legacy surveys should be sensitive enough to find them even in the SKA’s first deployment phase.

During cosmic evolution, galaxies experienced a sharp decline in star formation activity after a more active period about 10 billion years ago, called the “Cosmic Noon”. The transition from a golden epoch of star formation to a reduced rate of stars being born is still not fully understood. A drop in the amount of cool gas within galaxies, which serves as the fuel for star formation, is often considered the main reason. However, observations show that many galaxies still had sufficiently large gas reservoirs for star formation to happen. “Another possibility is that magnetic field pressure, high-energy particles, and turbulence increasingly stabilized the cool gas in galaxies,” says Fatemeh Tabatabaei. She is a former researcher at the Instituto de Astrofísica de Canarias (IAC) and a co-author of this study. She is now a faculty member at the Institute for Research in Fundamental Sciences (IPM) in Tehran, Iran. “Understanding the importance of these factors requires energy balance studies as a function of redshift,” she continues.

Redshift is the phenomenon by which the spectra emitted by, e.g., galaxies become shifted towards longer wavelengths due to the Universe’s expansion when they arrive at the telescopes’ detectors. The redshift can be directly translated into distance or age since the Big Bang.

To evaluate the prospect of the future Square Kilometer Array Observatory (SKAO) to help solve that puzzle, the astronomers have simulated the physical processes of the interstellar medium (ISM) of galaxies at varying redshifts. The ISM mainly consists of gas and microscopic solid particles astronomers call dust at different temperatures that pervade the space between the stars. The first part of this research is published today in the Journal Monthly Notices of the Royal Astronomical Society.

Observations of the radio continuum emission are a powerful way to trace energetic processes in galaxies. This emission emerges mainly from the interaction of high-energy particles with magnetic fields, an energetic component of the ISM. Deep and spatially resolved observations at different radio frequencies with SKAO allow astronomers to map these processes in galaxies near and far. Such observations are the critical step toward understanding the energy balance and structure formation in galaxies over cosmic time and shedding light on the processes governing galaxy evolution and the reduction in star formation activity. “Selecting the types of galaxies and cosmic distances needed to study these processes is an essential part of preparing for the actual SKA data”, says Mark Sargent, from the International Space Science Institute in Berne, Switzerland, co-author of the study.

“As the first step, we were interested in simulating the radio continuum emission from the ISM of typical high-redshift galaxies, using normal present-day spiral galaxies such as M51, NGC6946, and M33 as templates. Our simulation takes into account two different radiation mechanisms, the thermal free-free and the non-thermal synchrotron radiation”, says Masoumeh Ghasemi-Nodehi, a postdoc at IPM and collaborator of this project. “We showed that the SKA phase 1 MID radio frequency (SKA1-MID) surveys can map the synchrotron radiation in M51–like galaxies up to a redshift of 3 when the Universe had only 1/7 of its current age”, she continues.

“Both the relativistic particles and magnetic fields are expected to insert higher pressures into the interstellar medium at earlier times due to the higher level of star formation activity in these early galaxies. This expectation demonstrated by our studies needs to be further confirmed by the SKA observations”, says Fatemeh Tabatabaei.

The Square Kilometer Array (SKA), construction of which has begun this year, will soon be the largest radio telescope in the world. Thanks to its sensitivity and survey speed, this observatory will shed light on essential topics in astronomy and astrophysics. Its goals include investigating the formation of structures in the early universe, the formation of the first stars and galaxies, and galaxy evolution. In most cases, these phenomena will be studied through multi-frequency surveys covering different sky areas in various deployment stages.