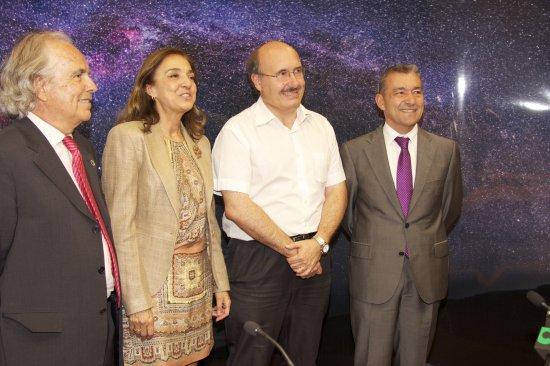 At its last meeting, the Governing Board of the Instituto de Astrofísica de Canarias (IAC) named Rafael Rebolo as the new Director of the pubic research body to succeed Francisco Sánchez.

Attending the Board meeting, chaired by Paulino Rivero (President of the Local Government of the Canary Islands),  were Carmen Vela (Secretary of State for Research, Development and Innovation) and Juan María Vázquez Rojas (Director General of Scientific and Technical Research). Also in attendance at the meeting were Juan Ruiz Alzola (Director of the Research, Innovation and Information Society of the Government of the Canary Islands), Catalina Ruiz Pérez (Vice-Rector for Research and Knowledge Transfer of the University of La Laguna), Guadalupe González Taño (President of the Local Government of La Palma) and the Francisco Sánchez (retiring Director of the IAC).

The new Director, Rafael Rebolo, is one of Spain’s internationally highest-profile researchers. A Research Professor of Spain’s Science Research Council (CSIC), he has  headed several research groups at the IAC. Born in Cartagena (Murcia) on 12 September 1961, Rebolo graduated in Physical Sciences at the University of Granada in 1984 and obtained his doctorate in Astrophysics in 1987 at the University of La Laguna.

He has been a researcher at the Instituto de Astrofísica de Canarias since 1984, of which he was Subdirector from 1997 to 1999. He has been a member of CSIC since 1988 and has held the title of Research Professor in Physical Sciences since 1998. Among his other distinctions are the Premio Iberdrola de Ciencia y Tecnología (2000), the Premio Rey Jaime I de Investigación (2001) and the Premio Canarias de Investigación e Innovación (2002); he has also received an honorary doctorate  from the Polytechnic University of Cartagena (2008).

With more than 250 articles published in the most important international peer-reviewed astrophysics journals (including ten in Nature and Science), he has headed various projects dedicated to the search for exoplanets and cosmic microwave background research. During his career, he participated, along with other researchers, in the discovery of the first brown dwarfs  and several giant exoplanets. He has also contributed to our understanding of the connection between supernovae and black holes.

The members of the Board thanked Sánchez for his tireless work during his long service as Founding Director of the IAC, in which he has unfailingly demonstrated his high professionalism and excellent management skills.