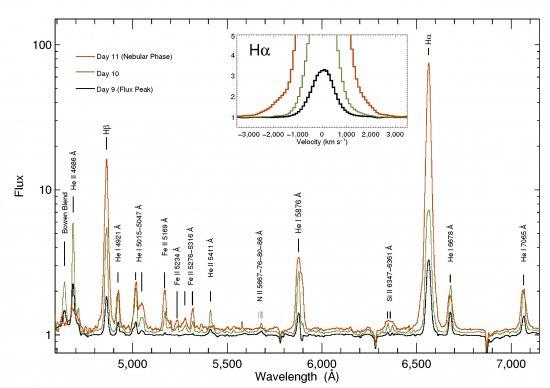 Average, normalized spectra corresponding to days 9 to 11 of the outburst. During this period the X-ray, optical and radio fluxes dropped by three orders of magnitude from the outburst peak. The spectra are very rich in emission lines that, while typical
Advertised on
01/01/2016
References
2016 Nature 534 75

V404 Cygni is a black hole within a binary system where a black hole of around 10 times the mass of the Sun is swallowing material from a very nearby star. During this process material falls onto the black hole and forms an accretion disc, whose hotter, innermost zones emit in X-rays. On June 2015 V404 Cygni went into outburst after a quiescence of over 25 years. During this period its brightness increased on million fold in a few days, becoming the brightest X-ray source in the sky. Optical observations carried out with the GTC 10.4m discovered the presence of a wind of cold material, which is formed in the outer layers of the accretion disc, regulating the accretion of material by the black hole. This wind, detected for the first time in a system of this type, has a very high velocity (3,000 kilometres per second) so that it can escape from the gravitational field around the black hole. At the end of this outburst the GTC observations revealed the presence of a nebula formed from material expelled by the wind (dubbed nebular phase). This phenomenon, which has been observed for the first time in a black hole, also allows us to estimate the quantity of mass ejected into the interstellar medium (see Figure).