A Short-duration Event as the Cause of Dust Ejection from Main-Belt Comet P/2012 F5 (Gibbs). 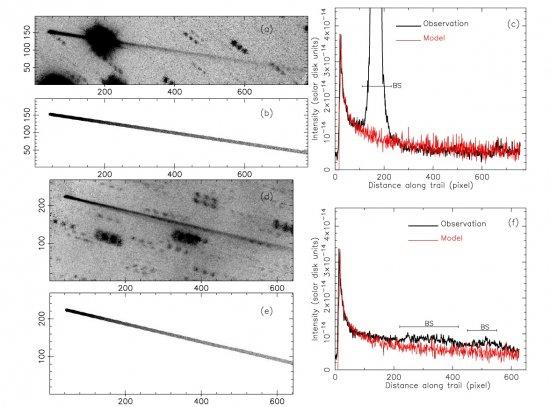 We present observations and an interpretative model of the dust environment of the Main-Belt Comet P/2010 F5 (Gibbs). The narrow dust trails observed can be interpreted unequivocally as an impulsive event that took place around 2011 July 1 with an uncertainty of ±10 days, and a duration of less than a day, possibly of the order of a few hours. The best Monte Carlo dust model fits to the observed trail brightness imply ejection velocities in the range 8-10 cm s–1 for particle sizes between 30 cm and 130 μm. This weak dependence of velocity on size contrasts with that expected from ice sublimation and agrees with that found recently for (596) Scheila, a likely impacted asteroid. The particles seen in the trail are found to follow a power-law size distribution of index ≈  –3.7. Assuming that the slowest particles were ejected at the escape velocity of the nucleus, its size is constrained to about 200-300 m in diameter. The total ejected dust mass is > ~ 5 × 108 kg, which represents approximately 4%-20% of the nucleus mass.