Spectroscopic follow-up of L- and T-type proper-motion member candidates in the Pleiades. 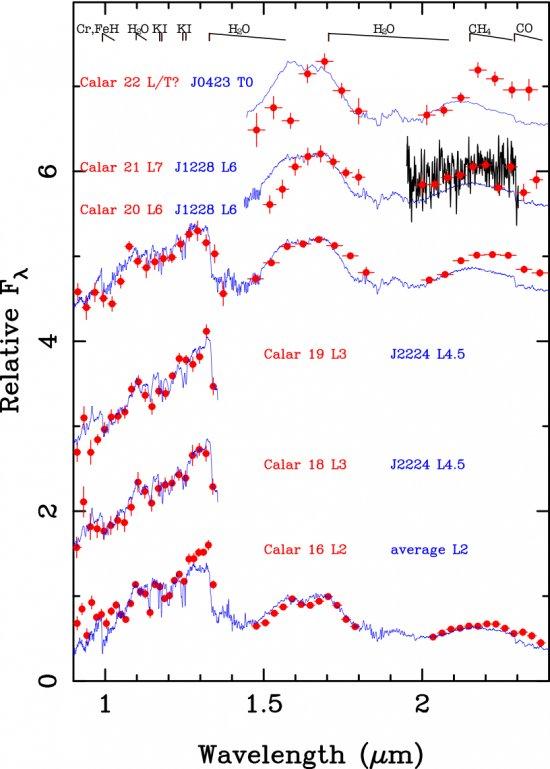 Figure Caption: LIRIS (red dots) and NIRSPEC (black line) spectra of Pleiades proper motion candidates. The NIRSPEC spectrum of Calar 21 is normalized to the K-band LIRIS spectrum. The left panel illustrates the comparison of the Pleiades data with field,
Advertised on
01/01/2014
References
DOI: 10.1051/0004-6361/201424634

We report on the near-infrared low-resolution spectroscopy and red optical (Z-band) photometry of seven proper-motion, very low-mass substellar member candidates of the Pleiades cluster with magnitudes in the interval J=17.5-20.8 and K=16.1-18.5 mag. Spectra were acquired for six objects with the LIRIS and NIRSPEC instruments mounted on the 4.2-m WHT and the 10-m Keck II telescopes. Z-band images of two of the faintest candidates were collected with ACAM/WHT. The new data confirm the low temperatures of all seven Pleiades candidates. From the imaging observations, we find extremely red Z-J and Z-K colors that suggest that the faintest target, Calar Pleiades 25, has a Galactic rather than extragalactic nature. We tentatively classify the spectroscopic targets from early-L to ~T0 and suggest that the L/T transition, which accounts for the onset of methane absorption at 2.1 micron, may take place at J,K ~ 20.3, 17.8 mag in the Pleiades (absolute values of M_J ~ 14.7 and M_K ~ 12.2 mag). We find evidence of likely low-gravity atmospheres based on the presence of triangular-shape H-band fluxes and the high flux ratio K/H (compatible with red H-K colors) of Calar Pleiades 20, 21, and 22, which is a feature also seen in field low-gravity dwarfs. Weak KI absorption lines at around 1.25 micron are probably seen in two targets. These observations add support to the cluster membership of all seven objects in the Pleiades. The trend delineated by the spectroscopic sequence of Pleiades late-M and L dwarfs resembles that of the field. With masses estimated at 0.012-0.015 Msol (solar metallicity and 120 Myr), Calar Pleiades 20 (L6 +/- 1), 21 (L7 +/- 1), and 22 (L/T) may become the coolest and least massive Pleiades members that are corroborated with photometry, astrometry, and spectroscopy. Calar Pleiades 25 (<0.012 Msol) is a firm free-floating planetary-mass candidate in the Pleiades.