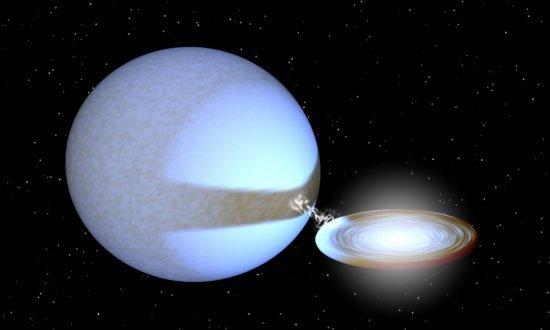 Three decades ago one of the first astronomical satellites designed toobserve X-rays detected a new type of object: it had a much higher luminosity than any star, but much lower than other types of identified sources, such as the nuclei of active galaxies. They were dubbed, in a not very imaginative way, ultraluminous X rays (ULX) sources. Even recently we were still not really sure what they are. In this work, we have managed to solve this mystery and we have found that the mechanism which produces such a large luminosity in the most thoroughly studied ULX is not, as many had hoped, an intermediate mass hole. ULX P13 does indeed host a black hole, but it is a "small" one, of stellar type,with less than 15 times the mass of the Sun. ULX P13 emits so much energy because it harbours a black hole which consumes fuel at a rate ten times greater than was believed possible. This is possible because ULX P13 is a binary system formed by a supergiant star which has 20 times the mass of the Sun, and a black hole. The black hole orbits the star with a period of 64 days, and absorbs some of the mass of its companion. This material which is being devoured so rapidly by the black hole is the cause of its great brilliance. The most probable explanation is that the rapid expansion of the supergiant companion "force feeds" the black hole, obliging it to swallow material more quickly than normal. Thus, we rule out, for ULX P13 - and likely also for the majority of the ULX sources - , the hypothesis which up to now has been preferred by many researchers: that the cause of their brilliance is an intermediate mass black hole, of between several hundred and several thousand times the mass of the sun. There is an intensive search for these intermediate class black holes because the current models for the formation of structure in the Universe predict their existence, but up to now not one of them has been detected with any degree of certainty.