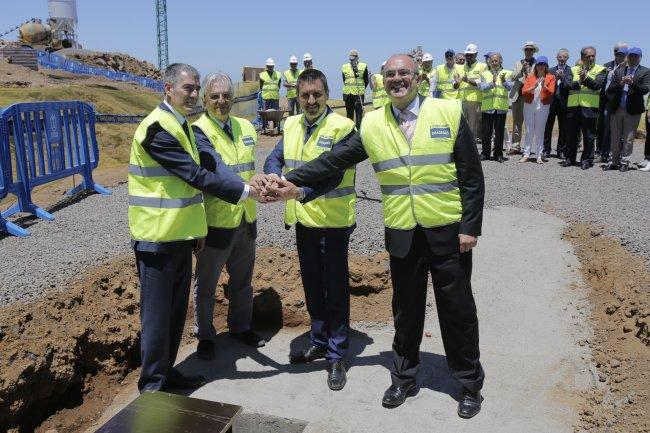 The President of the Canary Islands Gobernment, Fernando Clavijo; the Administrator of the Observatorio del Roque de los Muchachos, Juan Carlos Pérez Arencibia;  the Mayor of Garafía, Martín Taño; and the President of the Cabildo of La Palma, Anselmo Pest
Advertised on
30/06/2016

The Roque de los Muchachos Visitor Centre has started to become a reality. The ceremony of laying the first stone took place yesterday morning on ground belonging to the municipality of Garafía (La Palma) close to the Roque de los Muchachos Observatory of the Instituto de Astrofísica de Canarias (IAC). In the ceremony the first to speak was the mayor of Garafía, Martín Taño, who explained that they would bury the institutional coat of arms of the municipality, carved in stone, with the Pine of the Cross of Castille, an aboriginal rock design from the Cultural Park of La Zarza y La Zarcita, and 14 stars as a reference to the La Palma sky, and the 14 districts of Garafía. Next the administrator of the Observatory, Juan Carlos Pérez Arencibia read the commemorative plaque on the form of transparent glass, 15 x 10 cm with the logo of the IC, which would be buried symbolically. The President of the Cabildo of La Palma, Anselmo Pestana, said that he had selected for this first stone the text of the Declaration in Defence of the Night Sky and the Right to Starlight, which is now nine years old, and a disc with the drawings of the construction project and of its contents, the contract for the building work, and a monolith in memoriam to the 500 years since the founding of the Hospital of Our Lady of Dolores. Finally the President of the Canary Government, Fernando Clavijo, buried a copy of yesterday’s newspaper Diario de Avisos with its front page headline as the news of the initiation of the building of this Visitor Centre.

After this ceremony, which was transmitted live to a marquee at the Roque de los Muchachos Observatory, the authorities gave a series of speeches in the presence of other political, business, and social representatives of the Island of La Palma, as well as by the invited speakers at the Starmus festival which is taking place this week in Tenerife and La Palma, and who were to participate during the afternoon in the panel discussion “108 minutes” inside the building of the Gran Telescopio CANARIAS (GTC).

In his speech Rafael Rebolo, Director of the IAC thanked Garafía for ceding the land in the municipality in order to build what is now the Roque de los Muchachos Observatory, and all the authorities present for making it possible for this project to go ahead at last. Anselmo Pestana then said the with the Visitor Centre the work of researchers would be brought closer to everybody because it will make it possible to popularize directly the new research being carried out in the observatory. Finally Fernando Clavijo emphasized the importance for the Canaries of the science carried out in La Palma and Tenerife, and reminded the audience of the words of Professor Hawking that “The Canaries is a marvellous place to do Science”.

The Visitor Centre, covering 1,400 square metres, will be made up of three exhibition halls, a projector room, a shopo, a theatre, and restaurante, and a car park. Its aim will be, among other things, to spread knowledge about the astronomical research and the telescope operations which are mainly performed at the Roque de los Muchachos Observatory, as well as to present the unique aspects of the La Palma culture and landscape. It is estimated that some 100,000 people per year will benefit from the centre, in its incomparable setting. The project for the building is the work of the La Palma architect José Miguel Fuentes Marante.