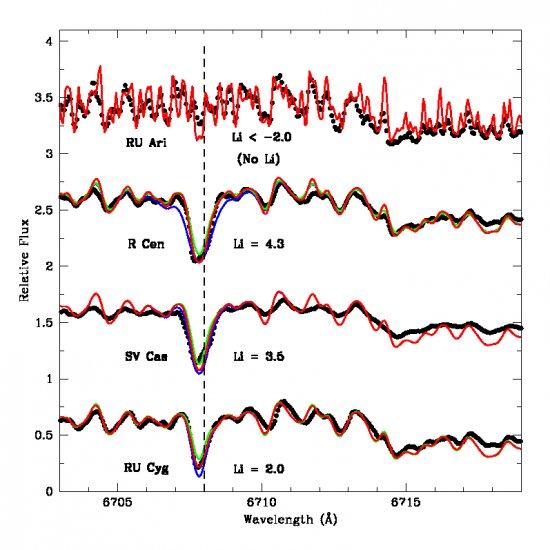 Low− and intermediate-mass (0.8 < M < 8 solar mass) stars constitute most of the stars in the Universe and they end their lives with a phase of strong mass loss and thermal pulses (TP) on the Asymptotic Giant Branch (AGB). AGB stars are fundamental to understand the chemical evolution of galaxies because they are one of the main contributors to the chemical enrichment (e.g. C, N, Li, F, and s-process elements) of the interstellar medium where new stars and planets born. In particular, the more massive (>4-5 solar mass) AGB stars experience Hot Bottom Burning (HBB), i.e. proton-capture nucleosynthesis at the base of the outer envelope that favors the conversion of C to N by the CN-cycle and reconversion of the C-rich to an O-rich atmosphere, by which great amounts of Li can be produced in the surface regions. Interestingly, HBB models predict that massive AGB stars experience a super Li-rich phase (log ε(Li) ~ 4 or approximately 1000 times solar) at the beginning of the TP phase. Yet, to date, no super Li-rich massive Galactic AGB stars have been unambiguously identified. In this work we report the first detections of super Li-rich massive AGB stars in our Galaxy. The extreme Li overabundances (~100-1000 times solar)  found together with the lack of s-process element (i.e. Rb and Zr) enhancements are consistent with these stars being truly massive O-rich AGB stars at the beginning of the TP phase. A comparison of our observations with the most recent HBB and s-process nucleosynthesis models confirms that HBB is strongly activated during the first TPs but the 22Ne neutron source needs many more TP and third dredge-up episodes to produce enough Rb at the stellar surface. We also show that the short-lived element Tc, usually used as an indicator of AGB genuineness, is not detected in massive AGBs, which is in agreement with the theoretical predictions when the 22Ne neutron source dominates the s-process nucleosynthesis.