Three supernova shells around a young star cluster in M33 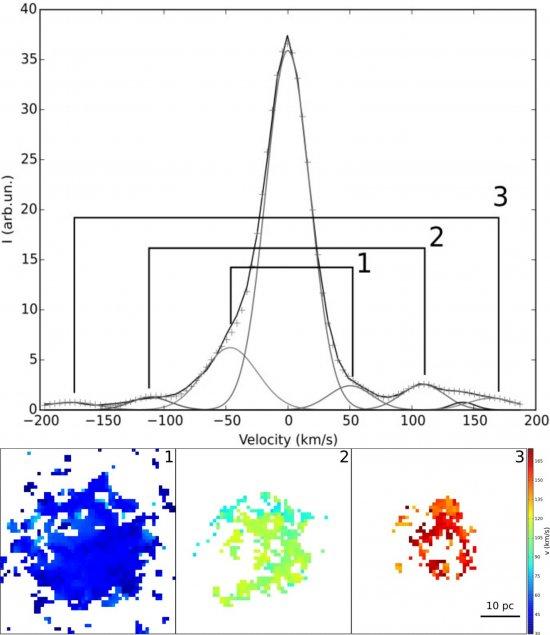 Upper panel: Example of a spectrum contained in the Fabry-Pérot data where we detect three pairs of emission peaks symmetrically spaced with the emission of the H ii region, which correspond to the presence of three expanding shells.Lower panel: Expansion
Advertised on
01/01/2016
References
2016 MNRAS 461 L87

Using a specialized technique sensitive to the presence of expanding ionized gas, we have detected a set of three concentric expanding shells in an H ii region in the nearby spiral galaxy M33. The detection was done using Fabry-Pérot spectroscopy, which allows us to map the ionized gas emission line Hα with exceptional precision in the spatial and spectral coordinates. We also took long-slit spectra of colisionally excited emission lines, which showed that the shells are likely originated from supernova explosions.

Using the flux and the kinematics we estimated the kinetic energy in the shells, and found it to be much lower than expected if we assume an homogeneous interstellar medium. We propose that molecular clouds have survived inside the star-forming region, which would account for the discrepancy in the physical properties we measure. Upon inspecting previous works with data on the region, we find supporting information for our hypothesis, such as the region's radio emission showing the presence of supernova remnants and the detection of a giant molecular cloud adjacent to the star cluster.