Visible and near-infrared observations of asteroid 2012 DA14 during its closest approach of February 15, 2013. 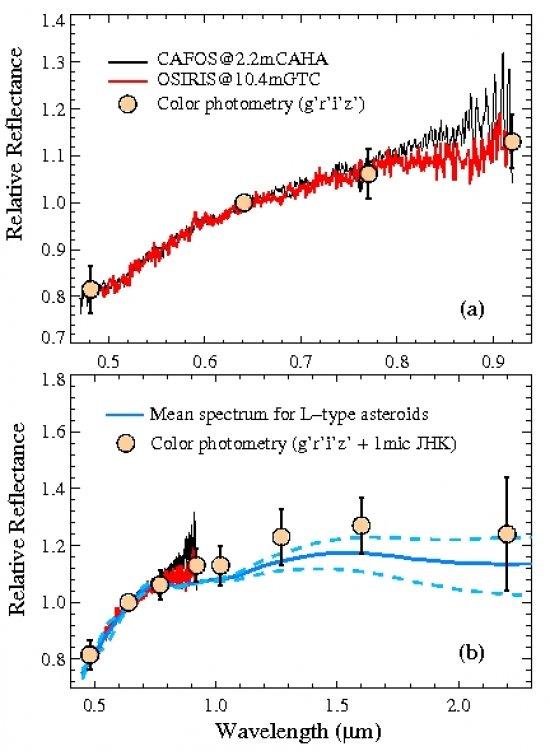 (a) Visible spectra of DA14 obtained with CAFOS at the 2.2m CAHA telescope (black) and OSIRIS at GTC (red). Filled circles are the reflectance R values obtained from the fotometry. (b) Same as the top panel, but adding the R values for the near-infrared.
Advertised on
01/01/2013
References
2013, A&A, 555, L2

Near-Earth asteroid 2012 DA14 made its closest approach on February 15, 2013, when it passed at a distance of 27,700 km from the Earth’s surface. It was the first time an asteroid of moderate size was predicted to approach that close to the Earth, becoming bright enough to permit a detailed study from ground-based telescopes. Asteroid 2012 DA14 was poorly characterized before its closest approach. The main objective of this work was to obtain new and valuable data to better understand its physical properties, and to evaluate the effects of such a close approach on the object. We acquired data using several telescopes on four Spanish observatories: the 10.4 m Gran Telescopio Canarias (GTC) and the 3.6 m Telescopio Nazionale Galileo (TNG), both in the El Roque de los Muchachos Observatory (ORM, La Palma); the 2.2 m CAHA telescope, in the Calar Alto Observatory (Almería); the f/3 0.77 m telescope in the La Hita Observatory (Toledo); and the f/8 1.5 m telescope in the Sierra Nevada Observatory (OSN, Granada). We obtained visible and near-infrared color photometry, visible spectra and time-series photometry. Visible spectra together with visible and near-infrared color photometry of 2012 DA14 show that the object can be classified as an L-type asteroid, a rare spectral type among the asteroid population, with a composition similar to that of carbonaceous chondrites. The time-series photometry provides a rotational period of 8.95 ± 0.08 h after the closest approach, and there are indications that the object suffered a spin-up during this event. The large amplitude of the light curve suggests that the object is very elongated and irregular, with an equivalent diameter of around 18 m. We obtain an absolute magnitude of HR = 24.5 ± 0.2, corresponding to HV = 25.0 ± 0.2 in V. The GTC photometry also gives HV = 25.29 ± 0.14. Both values agree with the value listed at the Minor Planet Center (MPC) shortly after discovery, although HV is very sensitive to the slope parameter G used to correct for phase angle. From the absolute photometry, together with some constraints on size and shape, we compute a geometric albedo of pV = 0.44 ± 0.20, which is slightly above the range of albedos known for L-type asteroids (0.082−0.405).