Astronomers find a galaxy unchanged since the early universe 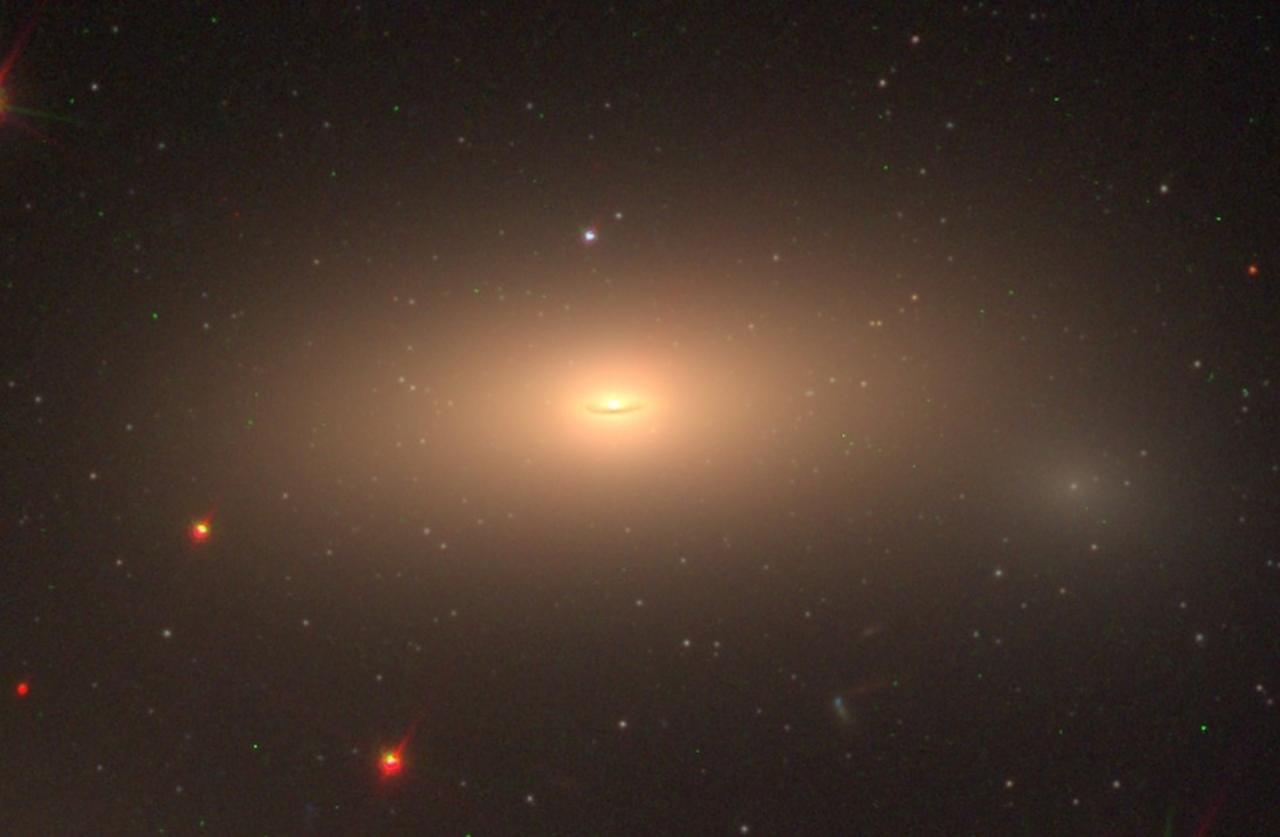 Color image of the Hubble Space Telescope (HST) of the massive relic galaxy NGC1277. The image was constructed using filters F475W, F625W and F850LP that cover the visible range of radiation. The data was obtained with the HST program GO-14215 (whose prin
Advertised on
12/03/2018
References
Article: A single population of red globular clusters around the massive compac…
Headquarter
Headquarters

There is a calculation suggesting that only one in a thousand massive galaxies is a relic of the early universe, conserving intact the properties it had when it was formed thousands of millions of years ago. For that reason when the researchers at the Instituto de Astrofísica de Canarias (IAC) and the University of La Laguna (ULL), Michael Beasley and Ignacio Trujillo located this rarity they wrote a proposal for time on the Hubble Space Telescope to observe the globular clusters surrounding it, and so confirm what had been suggested by the observations they had made with ground-based telescopes.

Globular clusters are groups of stars which orbit round the outskirts of galaxies and they were formed with the galaxies at their birth. There are two types of populations of globular clusters: the red ones, which are born in massive galaxies, which are found nearer to their centres and have higher content of heavy elements than of Helium, and the blue ones, which have a lower fraction of metals and which are found around massive galaxies as a consequence of their absorbing smaller galaxies.

Analyzing these clusters helps provide information about the history of galaxies. The results of the research published today in Nature showed that the galaxy NGC 1277 has only the red globular cluster which formed along with it during the formation period. Since then it has remained unchanged. “Globular cluster systems are very sensitive to the history of galaxy formation” explains Michael Beasley, the first author of the article who also affirms that “this is the first time a galaxy so massive has been observed with so few blue globular clusters”.

The galaxy NGC 1277 is composed of a million million stars and its name comes from its entry in the historic New General Catalogue of Nebulae and Star Clusters. It is in the central zone of the Perseus Cluster, the biggest concentration of galaxies close to the Milky Way, and its relative proximity, 70 Mpc (225 million light years) makes it the ideal object for analyzing the properties of a galaxy which has remained essentially unchanged since the early days of the universe. “The galaxy NGC 1277 gives us a unique opportunity to study a “primitive” galaxy in the “local” universe” adds Ignacio Trujillo, another of the authors of the article.

When this galaxy was born it gave birth to 1,000 stars per year, whilst for comparison the Milky Way is currently forming only one star per year.

The reason why these researchers think that this massive galaxy has kept its original form and composition unchanged during all this time is because it formed as a satellite to the central galaxy of the Perseus cluster, which absorbed any material that could have fallen onto NGC 1277 and caused it to evolve differently. It orbits the central galaxy now, at a velocity of 1,000 kilometres per second.

The authors are planning to ask for more time with the Hubble Space Telescope and with its successor the James Webb Space Telescope, to observe the globular clusters of other relic galaxies.