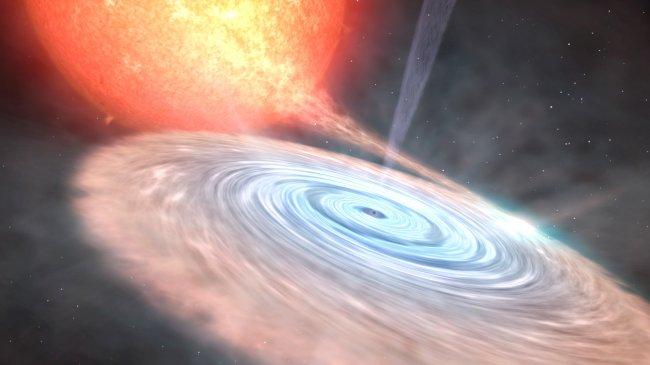 V404 Cygni is a black hole within a binary system located in the constellation of Cygnus. In such systems, of which less than 50 are known, a black hole of around 10 times the mass of the Sun is swallowing material from a very nearby star, its companion star. During this process material falls onto the black hole and forms an accretion disc, whose hotter, innermost zones emit in X-rays. In the outer regions, however, we can study the disc in visible light, which is the part of the spectrum observable with the 10.4m Gran Telescopio CANARIAS (GTC); the biggest optical-infrared telescope in the world, situated at the Roque de los Muchachos Observatory (Garafía, La Palma, Canary Islands) in Spain.

V404 Cygni at only 8.000 light years away, is one of the closest known black holes to the Earth, and has a particularly large accretion disc (with a radius of about ten million kilometres), making its outbursts especially bright at all wavelengths (X-rays, visible, infrared and radio waves).

On June 15th 2015 V404 Cygni went into outburst after a quiescence of over 25 years. During this period its brightness increased on million fold in a few days, becoming the brightest X-ray source in the sky. The GTC began taking spectroscopic observations on June 17th via the activation of a “target of opportunity” programme, designed by IAC researchers for this kind of event.

The observations show the presence of a wind of neutral material (unionized hydrogen and helium), which is formed in the outer layers of the accretion disc, regulating the accretion of material by the black hole. This wind, detected for the first time in a system of this type, has a very high velocity (3,000 kilometres per second) so that it can escape from the gravitational field around the black hole. Its presence allows us to explain why the outburst, in spite of being bright and very violent, with continuous changes in luminosity and ejections of mass in the form of jets was also very brief (lasting only two weeks).

At the end of this outburst the GTC observations revealed the presence of a nebula formed from material expelled by the wind. This phenomenon, which has been observed for the first time in a black hole, also allows us to estimate the quantity of mass ejected into the interstellar medium.

“The brightness of the source, and the large collecting area of the GTC” commented Teo Muñoz Darias, a researcher at the Instituto de Astrofísica de Canarias (IAC) and the first author of the article, “allowed us not only to detect the wind, but also to measure the variation of its properties on time-scales of minute. The database obtained is probably the best ever observed for an object of this kind”, and he added: “This outburst of V404 Cygni, because of its complexity and because of the high quantity and quality of the observations, will help us understand how black holes swallow material via their accretion discs”.

“We think that what we have observed with the GTC in V404 Cygni happens, at least, in other black holes with large accretion discs” concluded Jorge Casares and Phil Charles, two of the discoverers of this black hole in 1992, and co-authors of the article.

The work is being published in the scientific journal Nature. The research team was led by the IAC astrophysicist Teo Muñoz Darias, and includes four other members of the same institute: Jorge Casares, Daniel Mata Sánchez, Montserrat Armas Padilla, and Manuel Linares, as well as researchers from the universities of Oxford and Southampton in the United Kingdom, and from research institutes in Germany, France and Japan. The observations were made with the OSIRIS instrument on the GTC, and were carried out during the two weeks of the outburst, in observing windows of 1-2 hours per night. In addition, the article included observations in X-rays by the INTEGRAL and SWIFT satellites, as well as data from the AMI radio-interferometer in the United Kingdom.

As explained in the acknowledgements of the article, nine of the series of data obtained during the night of June 27th were obtained with the GTC in the presence of His Majesty King Felipe VI of Spain who attended the observations as part of the celebrations of the 30th anniversary of the Canary Island Observatories. The King was able to observe at first hand the exceptional range of phenomena exhibited by this black hole.