The colour scale in the image shows the amount of infrared (heat) radiation coming from warm dust particles in the filaments and luminous stars within a light year of the Galactic centre. The observations were made with the largest telescope in Europe, wh
Advertised on
20/02/2018

Black holes are astronomical objects whose gravity is so intense that even light cannot escape from them. It is usual for a galaxy to harbour a supermassive black hole at its centre, and the Milky Way is no exception. Today the journal “Monthly Notices of the Royal Astronomical Society” contains the results of a study which used the infrared camera CanariCam, on the Gran Telescopio Canarias (GTC)  at the Roque de los Muchachos Observatory (Garafía, La Palma) to make a map of the magnetic field in the clouds of gas and dust orbiting this black hole.

The visible light emitted by th e sources at the centre of the Milky Way is blocked to our sight by clouds of interstellar gas and dust. However infrared radiation, X-rays, and radio waves can pass through these clouds. The CanariCam instrument combines infared detection with a polarizer which permits the detection and measurement of characteristics associated with magnetic fields in the universo.

The infrared map made with CanariCam covers a region about one light year  across, the the polarization of the infrared light traces the magnetic field in the filaments of hot gas containing dust grains. “ Large telescopes such as the GTC, and an instrument such as CanariCam allows us to see the material orbiting a black hole which is 25,000 light years away and, for the first time, observe in detail the magnetic fields present” says Pat Roche, a Professor at the University of Oxford, and head of the group which has made this map. The group hopes to make further observations of the centre of the Galaxy to explore the relationships between the magnetic field, the stars, the gas and the dust in this critical zone of our Galaxy, with the accuracy and the details which can be obtained by the GTC, whose primary mirror has a diameter of 10.4m , making it the largest optical-infrared telescopi in the world, and which will enable the revelation of the most precise details of the polarized structures.

CanariCam was developed at the University of Florida by a team directed by Charles Telesco and is the only instrument in the world which can measure polarization at wavelengths in the mid-infrared.

The Observatories of the Instituto de Astrofísica de Canarias (IAC) and the Gran Telescopio CANARIAS (GTC) are part of the network of Singular Sciencific and Technical Infrastructure (ICTS) of Spain. 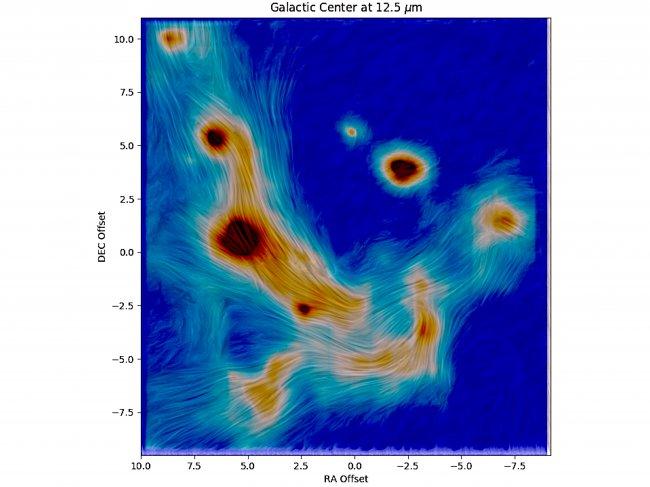