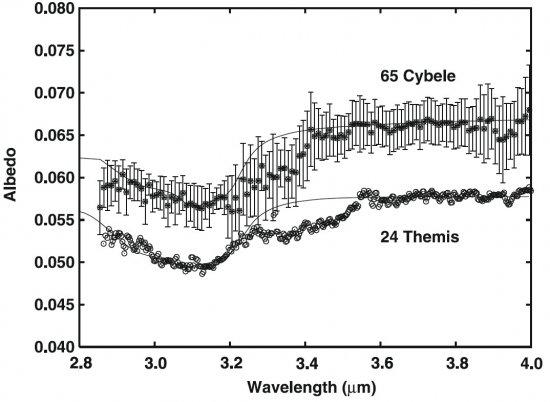 The team of researchers is the same that published last April two papers in Nature showing the first evidence of water ice and organic molecules on an asteroid, 24 Themis. Both, 65 Cybele and 24 Themis, are in the same region of the asteroid belt between Mars and Jupiter, at about 3.2 AU. Asteroid 65 Cybele is somewhat larger than asteroid 24 Themis. Cybele has a diameter of 290 km while Themis has a diameter of 200 km.

This discovery suggests that this region of our solar system contains more water ice than anticipated, and it supports the theory that asteroids may have hit Earth and brought our planet a significan part of its water and the building blocks for life to form and evolve here.

Context. (65) Cybele is the most representative member of a population of primitive asteroids in the outer edge of the main belt, the Cybele asteroids. Recent dynamical models suggest that a