DESI opens its 5.000 eyes to capture the colors of the Cosmos

The new instrument, the result of an international collaboration of almost a hundred institutions, including the Instituto de Astrofísica de Canarias, has made its first trial observation. Designed to explore the mystery of dark energy, its installation is about to be completed at the Mayall telescope of the Kitt Peak Observatory in Arizona (United States).

On October 23rd, the DESI (The Dark Energy Spectroscopic Instrument) aimed at the night sky and obtained its first images. The long-awaited instrument is designed to explore the mystery of dark energy, which makes up about 68 percent of the universe and is speeding up its expansion.

DESI’s components are designed to automatically point at preselected sets of galaxies, gather their light, and then split that light into narrow bands of color to precisely map their distance from Earth and gauge how much the universe expanded as this light traveled to Earth. In ideal conditions DESI can cycle through a new set of 5.000 galaxies every 20 minutes.

“After a decade in planning and R&D, installation and assembly, we are delighted that DESI can soon begin its quest to unravel the mystery of dark energy”, said DESI Director Michael Levi of the Department of Energy’s Lawrence Berkeley National Laboratory (Berkeley Lab), the lead institution for DESI’s construction and operations. "Most of the universe’s matter and energy are dark and unknown, and next-generation experiments like DESI are our best bet for unraveling these mysteries”, Levi added.

The DESI collaboration has participation from nearly 500 researchers at 75 institutions in 13 countries, including the Instituto de Astrofísica de Canarias, which participates in the consortium as part of the Granada-Madrid-Tenerife group with the Campus de Excelencia Internacional of the Universidad Autónoma de Madrid and the Instituto de Astrofísica de Andalucía (IAA-CSIC), as well as several other research centers in Spain. Installation of DESI began in February 2018 at the Nicholas U. Mayall Telescope at Kitt Peak National Observatory near Tucson, Arizona. Over the past 18 months, a bevy of DESI components were shipped to the site from institutions around the globe and installed on the telescope. DESI’s focal plane, which carries 5.000 robotic positioners that swivel in a choreographed “dance” to individually focus on galaxies, is at the top of the telescope.

"DESI brings a dramatic advance in the data adquisition rate to study the expansion of the universe, from the measurement of the velocities of galaxies", explains the IAC researcher Carlos Allende Prieto, who underlines "we started taken this type of data one galaxy at at time, we can do it now in batches, 1.000 at a time, but with DESI we will be able to do 5.000 at a time, and three times faster thanks to a larger telescope, so the data acquisition is in fact 20 times faster". Despite the main goal for DESI is the study of the expansion of the universe, the project will also observe tens of millions of stars in our own galaxy, the Milky Way, whose most distant parts have never been observed in such detail.

“This is a very exciting moment”, said Nathalie Palanque-Delabrouille, a DESI spokesperson and an astrophysics researcher at France’s Atomic Energy Commission (CEA) who has participated in the selection process to determine which galaxies and other objects DESI will observe. “The instrument is all there. This is a very significant advance compared to previous experiments. By looking at objects very far away from us, we can actually map the history of the universe and see what the universe is composed of”.

DESI is supported by the U.S. Department of Energy’s Office of Science; the U.S. National Science Foundation, Division of Astronomical Sciences under contract to the NSF’s National Optical-Infrared Astronomy Research Laboratory; the Science and Technologies Facilities Council of the United Kingdom; the Gordon and Betty Moore Foundation; the Heising-Simons Foundation; the French Alternative Energies and Atomic Energy Commission (CEA); the National Council of Science and Technology of Mexico; the Ministry of Economy of Spain; and DESI member institutions.

Video DESI by the numbers:
https://youtu.be/1rL2wGfQY0I 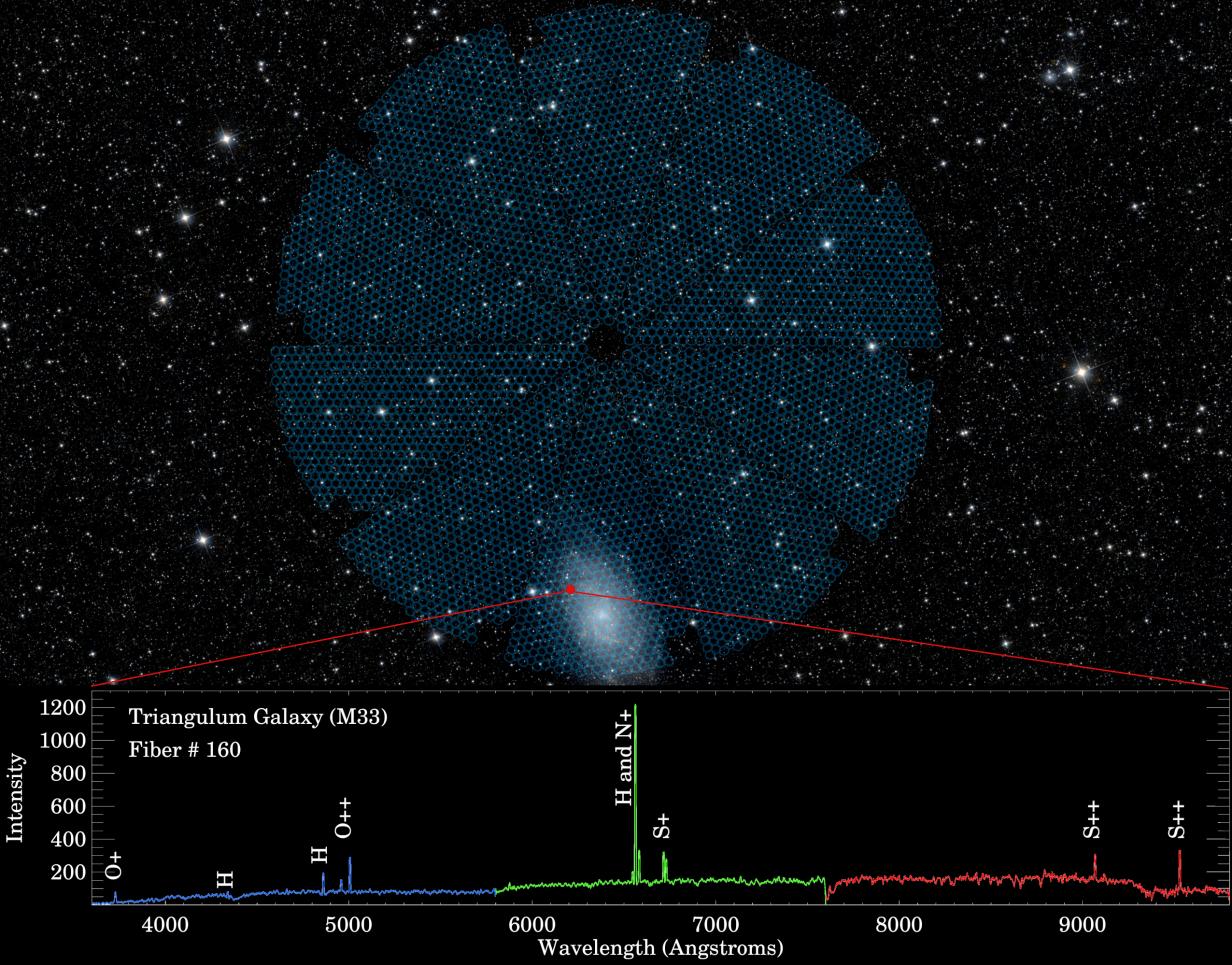