Emission from the centre of a galaxy has a serpentine shape

A blazar is an astronomical object within an elliptical galaxy, at whose centre there is a supermassive black hole which emits jets of radiation and particles with huge energies. When these are directed towards the Earth we can detect them. They are among the most energetic phenomena in the universo.

In the second half of last year the blazar CTA 102, which is 7,600 million light years from Earth, brightened considerably, drawing the attention of all the astronomers who specialise in this kind of objects. The peak emission was detected on December 28th when it was 3,500 times greater than the brightness minima observed in previous years. This event was so exceptional that for a few days this object was the brightest blazar observed until now.

To follow this event the researchers of the Astrophysical Observatory of Turin (OATo) coordinated an intense multifrecuency observational campaign in the framework of of the international collaboration Whole Earth Blazar Telescope (WEBT). More than 40 telescopes in the northern hemisphere took thousands of observations in the visible, radio, and near infrared ranges, which enabled the production of detailed light curves. Among the telescopoes used in the collaboration were the Carlos Sánchez Telescope and the IAC-80 and STELLA telescopes, all of them at the Teide Observatory (Izaña, Tenerife).

“This large quantity of data has enabled us to verify the hypothesis that the variability of this object is due to changes in the relativistic Doppler factor” explains José Antonio Acosta Pulido, a researcher at the IAC/ULL and one of the authors of the article, which is published today in Nature magazine.

The researchers’ interpretation is that the jet is “serpentine and inhomogeneous” because it emits radiation over a range of frequencies and from different zones, which change their orientation due to the instabilities in the jet, or to orbital motions.

Within this interpretation Acosta explains that “The incredible rise inthe luminosity was due to the increased alignment (this occurred nearly 8 thousand million years ago) of the emitting zone of the jet with our line of sight to the object” Thanks to these observatinos the model used in this research is supported both theoretically and observationally.

“Three dimensional numerical simulations, taking into account the magnetohydrodynamic properties and the relativistic velocities, predict the appearance and the propagation of instabilities in the jet, which then distort it “ explains Acosta. He adds that “ In addition the images obtained by radio-interferometry show,on scales of one parsec (some three light years) that the jet appears to be helical, and contains many vórtices. The picture which emerges is one of a twisting jet whose  emission is amplified at different wavelengths at different times, by the “lighthouse effect”. The orientation in December 2016 was especially favourable for the extraordinary amplification observed.

Link to the article: http://rdcu.be/AjnW 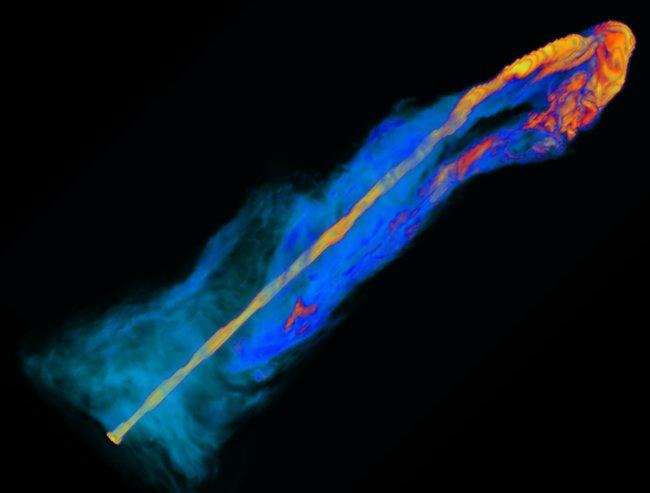