The spectrum acquired by GTC of interstellar comet C/2019 Q4 (Borisov) reveals that this object has a surface composition not unlike that found in Solar System comets.

Shortly before dawn on September 13th, Julia de León, Miquel Serra-Ricart, Javier Licandro, all members of IAC's Solar System Group, and Carlos Raúl de la Fuente Marcos, from the Complutense University of Madrid, obtained high resolution images and visible spectra of comet C/2019 Q4 (Borisov) using the OSIRIS instrument at the 10.4m GTC, installed in the Roque de los Muchachos Observatory (Garafía, La Palma). Observations were not easy, the object could only be seen at low elevation over the horizon and small angular separation from the Sun. However, thanks to the excellent atmospheric conditions of the Canarian Observatories and GTC's expert telescope support astronomerss, these challenging observations were successfully completed.

Miquel Serra Ricart points out that "the image of C/2019 Q4 shows a cometary object, with well-defined coma and tail". Julia de León adds that "the spectrum of this object is similar to those of Solar System comets and this indicates that their composition must be similar". Comets are made of ice and dust, they are ---in the words of Fred Whipple in 1950--- "dirty snowballs" formed in the outermost regions of a protoplanetary disc, where water is frozen because it is so far away from the central star. They are part of the debris left behind after the formation of the Giant planets. Comet C/2019 Q4 was discovered on August 30, 2019 by G. Borisov observing from the Crimean Astrophysical Observatory, when the object was nearly 3 AU from the Sun. The discovery was announced by the Minor Planet Center on September 11, 2019 stating that C/2019 Q4 is following a clearly hyperbolic path and that it is approaching the Sun at high speed. The comet will be closest to the Sun, at 2 AU, early in December and then it will head for interstellar space, leaving the Solar System, never to return. This is only the second confirmed interstellar visitor after interstellar object 1I/2017~U1 (`Oumuamua), discovered two years ago.

Comet C/2019 Q4 could not have formed in our Solar System as we know it, it has to have formed around a star other than the Sun and escaped from its gravitational attraction, probably millions of years ago. Comet C/2019 Q4 is the first clearly cometary object observed in the inner Solar System, but of extrasolar origin. Carlos and Raúl de la Fuente Marcos point out that their "direct N-body simulations that use the latest orbit determination place C/2019 Q4 well beyond the sphere of influence of the Solar System only 50,000 years ago, moving inbound at a velocity nearly 500 times higher than the escape velocity from the Solar System at that distance. In this context, it is difficult to exclude an extrasolar origin for C/2019 Q4." 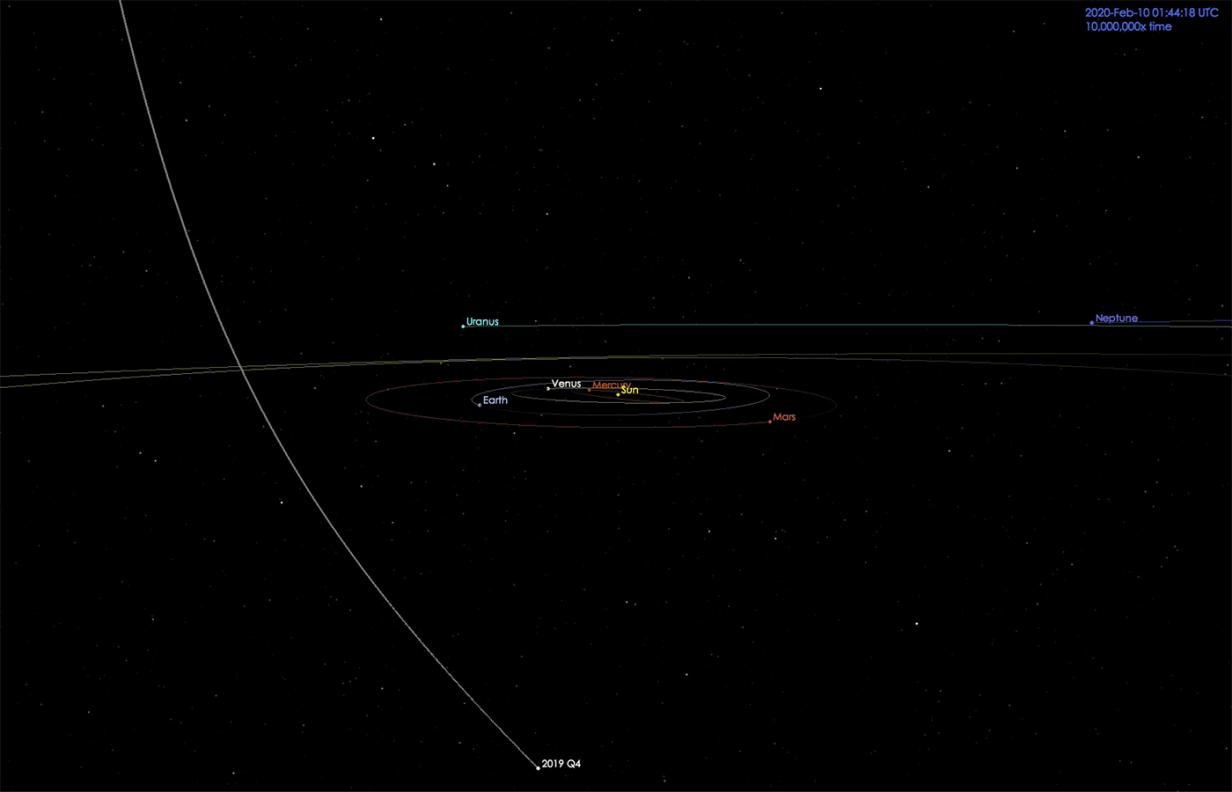