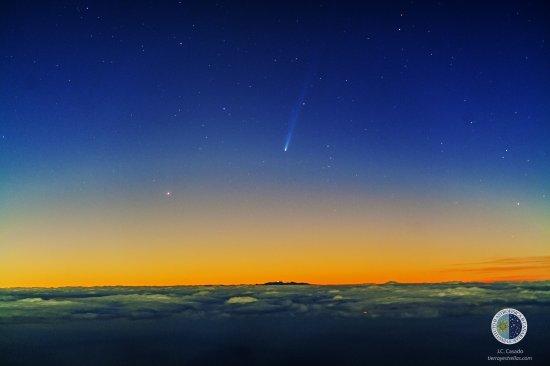 Picture of the ISON comet the dawn November 21 (6:20UT) (credits J.C. Casado, tierrayestrellas.com, iac.es). The image was taken from the Teide Observatory (Instituto de Astrofísica de Canarias) with a digital camera (canon 5D-MII, objetivo 85mm) and an
Advertised on
22/11/2013

ISON has put itself at risk…

The IAC accompanies ISON in his appointment with the Sun on November 28th.

The IAC has obtained the latest images before perihelion, of a comet who is torn between life and death…

From the skies of Canary Islands, the comet C/2012 S1 (ISON), is observed without atmospheric interference. The celestial body is on display these days, revealing all his activity.

Comets are objects that have survived the formation of the giant planets and their satellites, the remains of the "bricks" with which they formed. These are real relics of the formation of the solar system, ancient raw material. The material they contain therefore, gives us unique information about the origin of our planetary system, as they have suffered few changes since then. Although we see them as dirty looking snowballs perhaps, in the distant past, they injected life onto the Earth. However, they could also take it away one day.

The IAC – Instituto de Astrofísica de Canarias - has prepared an campaign to capture images of ISON from their observatories. For more than a year they have been taking pictures of the comet. Apart from the scientific value these pictures can bring to astrophysics in capturing ISON’s approach to the Sun is the extraordinary beauty and quality of the Canarian sky.

This research can also help us to understand better the planetary systems that are being developed in other stars; the objects around us.

ISON was discovered on September 21, 2012 by Vitali Nevski and Artyom Novichonok, two Russian astronomers who belong to the international project International Scientific Optical Network. At the time of its discovery, the comet was at 6.29 astronomical units from the Sun (about 943 million kilometers, between the orbits of Jupiter and Saturn). ISON had a burst of activity on 13 November and its brightness increased by factor 15 in 3 days. Currently its magnitude is 4 and now it is an object visible to the naked eye just before dawn in a southeasterly direction. It is quite close to the planet Mercury, also visible before sunrise (see Figure 1).

The observation window is getting shorter because the comet is quickly approaching the Sun. The key day will be on Thursday November 28 at 18:25 UT (Universal Time) when ISON will reach its perihelion (closest approach to the Sun). It will pass only at 0.012 UA (1.800.000 km, remember that our star’s diameter is 1.300.000 km) from the center of the Sun, and a speed of 1.4 million km per hour.  The action of solar gravity, the high temperatures to which it will be subjected, and the intense radiation of “The Astro King”, could disintegrate it. By then we will know if ISON has reached the end of his life ... Until then, every day, we will follow its footsteps.

According to information obtained by NASA the diameter of the comet is estimated to be 10km and it is believed to be a new comet, now the observations of the comet is mainly in the hands of small telescopes, since it is very near the horizon and can only be seen just before sunrise. From the GLORIA (gloria-project.eu) network of robotic telescopes is carrying out a follow-up campaign.