Lyrids 2020: wishes through the window

Image of several lines of Geminides observed from the Teide Observatory in the early morning of 14/12/2013. The telescope in the foreground is the OGS (ESA) and above the Teide is the constellation of Orion. Credit: J.C. Casado (StarryEarth).
Advertised on
20/04/2020
Authors
SCIENCE COMMUNICATION AND OUTREACH UNIT
TEIDE OBSERVATORY

On the night of 21st April we will be treated to the maximum of the Lyrids meteor shower. Just as for the other recent astronomical events we will have to see them from home, so that we will need to be very patient, because they  will appear with a frequency of barely one every 10 or 15 minutes.

The comets, in their orbits around the Sun leave a trail of ice, dust, and rock as they pass. The Earth, as it orbits the Sun, passes through these clouds of tiny particles, called meteoroids. When they fall into the Earth’s atmosphere their high speed causes intense friction, which produces the luminous streaks we see crossing the sky.

During these days we are passing through the particle cloud left by comet Thatcher (C/1861 G1) during its last visit to terrestrial perigee in 1861. Even though it is possible that from April 15th through the end of the month we may see one of these meteors disintegrating in the atmosphere, the maximum of the meteor shower will occur during the night of Tuesday 21st till Wednesday 222nd April from 23.00 hrs. But also on that night the New Moon will help us, making it easier to see one of the “shooting stars”.

Meteor showers are named for the constellation from which they seem to come. The Lyrids are called by that name because their radiant (the point in the sky from where they appear to diverge) is in the constellation of Lyra, which we can identify because it contains the star Vega, one of the most brilliant in the night sky. But it will not be necessary to look in that direction to make a wish. It will be enough to look constantly at any point on the sky and wait patiently for 15 to 20 minutes.

During the year there can be up to 50 meteor showers, but the most important are the Quadrantids, the Perseids, and the Geminids. This afternoon, at 19:05 Canary time, (20:05 in the Peninsula) the IAC astronomer, and manager of the Teide Observatory, Miquel Serra-Ricart will talk about them in a new lectura in the #IACUniversoEnCasa cycle.

During the past four weeks some twenty professional astronomers have participated in this initiative which has toured the Universe from its origin until its end. The talks of #IACUniversoEnCasa. are broadcast every day via the sky´live.tv channel at 1(.05 UT, during the period of the measures adopted to avoid the propagation of the coronavirus COVID-19. Participating in these videos are the Instituto de Astrofísica de Canarias (IAC), the project Energy Efficiency Laboratories (EELabs) and sky-live.tv. 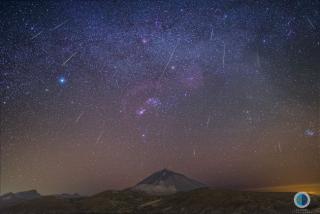 Press release
Lirids 2018: a date with the stars this weekend

The best time to observe them will be on Sunday April 22nd, after midnight local time. The STARS4ALL project will transmit them in real time from the Teide Observatory (Izaña, Tenerife). 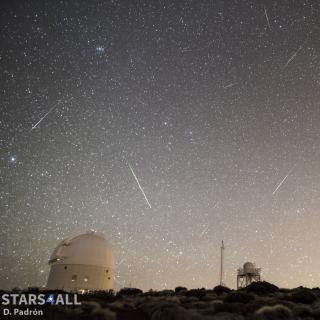 Press release
The Quadrantid meteor shower: start the year with a good wish

This astronomical event will be broadcast live via the channel sky-live.tv in the early hours of January 4th, with the collaboration of the European project EELabs. Together with the Geminids and the Perseids, this is the most intense meteor shower of the year. The three most spectacular meteor showers of the year are the Perseids (in August) the Geminids (in December) and the Quadrantids in the first week of January. Although the Perseids are the best known, the maximum is in a holiday period with mild night-time temperatures, the Geminids and the Quadrantids never let us down, with an