Advertised on:
9
2018
Journal
Astronomy & Astrophysics
Description
Aims: The very high energy (VHE ≳100 GeV) γ-ray MAGIC observations of the blazar S4 0954+65, were triggered by an exceptionally high flux state of emission in the optical. This blazar has a disputed redshift of z = 0.368 or z ≥ 0.45 and an uncertain classification among blazar subclasses. The exceptional source state described here makes for an excellent opportunity to understand physical processes in the jet of S4 0954+65 and thus contribute to its classification. Methods: We investigated the multiwavelength (MWL) light curve and spectral energy distribution (SED) of the S4 0954+65 blazar during an enhanced state in February 2015 and have put it in context with possible emission scenarios. We collected photometric data in radio, optical, X-ray, and γ-ray. We studied both the optical polarization and the inner parsec-scale jet behavior with 43 GHz data. Results: Observations with the MAGIC telescopes led to the first detection of S4 0954+65 at VHE. Simultaneous data with Fermi-LAT at high energy γ-ray (HE, 100 MeV < E < 100 GeV) also show a period of increased activity. Imaging at 43 GHz reveals the emergence of a new feature in the radio jet in coincidence with the VHE flare. Simultaneous monitoring of the optical polarization angle reveals a rotation of approximately 100°. Conclusions: The high emission state during the flare allows us to compile the simultaneous broadband SED and to characterize it in the scope of blazar jet emission models. The broadband spectrum can be modeled with an emission mechanism commonly invoked for flat spectrum radio quasars (FSRQs), that is, inverse Compton scattering on an external soft photon fieldfrom the dust torus, also known as external Compton. The light curve and SED phenomenology is consistent with an interpretation of a blob propagating through a helical structured magnetic field and eventually crossing a standing shock in the jet, a scenario typically applied to FSRQs and low-frequency peaked BL Lac objects (LBL).
Related projects 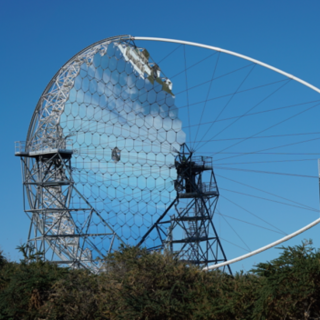 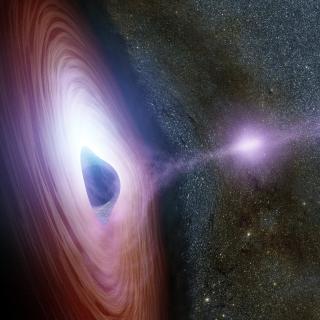 Active Galactic Nuclei (AGN) are characterized by a strong emission coming from a very compact region (only few pcs) at the galaxy center. Blazars form a class of AGN, characterized by high luminosity in a broad frequency range, from radiofrequencies to high energies (X-rays and γ-rays), as well as extreme variability and high polarization at