The CHEOPS mission, in which the IAC is participating, observes its first exoplanets

CHEOPS, the new exoplanet mission of the European Space Agency (ESA) in coordination with Switzerland, in which the Instituto de Astrofísica de Canarias (IAC) is participating along with other European instituttions, has successfully complete its almost three month period of the verification and calibration of its instrument, with better results than expected. Astrophysicists from the IAC are leading a group of researchers and engineers who recommend the type of observations to monitor the behaviour of the satellite during its time in space and, as part of the science team, participate in the definition of the scientific programmes and which stars and planets to observe.

The satellite, which will start routine science operations at the end of april, has already obtained observations of known planets while they transited their parent stars and blocked a fraction of the light from the star.

Launched in December 2019, CHEOPS -the Characterising Exoplanet Satellite-, opened its eyes on the universe at the end of January, and a little later tood its first images of stars, intentionally blurred.

This intentional blurring improves the measurement as it spreads the light from the stars over several pixels of the detector, which allows the measurement of the sizes of the planets with unprecedented precision and to determine their densities, by combining the sizes with separate measurements of their masses.

Precision is the key to current exoplanet research, in order to characterize their structure, formation and evolution, and to measure accurately their sizes, in particular for the small planets which are the main objective of CHEOPS. For this reason, to test that this satellite with a size of 1.5m was able to carry out its mission, it was necessary to use a large number of tests.

With the first series of tests in flight, carried out between January an February, the experts in the mission began to analyze the response of the satellite, and in particular of the telescope and the detector, in a true space environment. From March, CHEOPS concentrated on stars already well studied.

“To test how well CHEOPS was working we first needed to observe stars whose properties are well known, stars with reliable behaviour, hand picked for their stability, with no sign of activity” explained Kate Isaac, project scientist for CHEOPS in ESA.

This method allowed the astronomers to verify that the satellite is as accurate and stable as needed to carry out its ambitious objectives. This setting up period showed not only that CHEOPS attained the photometric accuracy required, but that it can be managed from Earth as necessary to carry out its scientfic observations.

“In the IAC we took on the job -explains Roi Alonso, and IAC researcher who is a member of the science team of the mission- of leading a group of researchers and engineers who recommend the type of observations which need to be done to monitor the behaviour of the satellite during its time in space. For example, every week the telescope will be pointed at a zone free of stars to monitor the evolution of the number of hot pixels in the zone on the detector used to take the scientific observations. Many of these observations were performed in this phase of “in-orbit commissioning” . Also as part of the science team we are participating in the definition of the programmes and of the stars and planets to observe”.

“In the most recent meeting of the science consortium, carried out telematically, we could see the high precision which CHEOPS obtained during the calibration phase, slightly better than expected. This is an excellent starting point for the scientific observations, which will start in a few days”, commented Enric Pallé, another IAC astrophysicist who is participating in CHEOPS.

The hour of the exoplanets

During the last two weeks of the calibration phase one of the stars observed by CHEOPS was HD 93396, a yellow subgiant star 320 light years away, slightly cooler and three times bigger than our Sun. The aim of these observations was to characterise KELT-11b, a gassy planet approximately a 30% bigger than Jupiter, in an orbit much closer to its star than Mercury is to the Sun.

The light curve of the star shows a clear fall due to the eight hour long transit of KELT-11b. Using these data, the scientists have determined with great accuracy the diameter of the planet, 181,600 km with an uncertainty of less than 4,300 km.

"The measurements made with CHEOPS are five times more accurate than those made from Earth. This gives us a forward lood at what we will be able to achieve with CHEOPS in the months and years to come”, emphasizes Willy Benz, the Principal Investigator of the consortium of the missions of CHEOPS, and Professor of Astrophsics at the University of Berne (Switzerland).

On March 25th a formal overview of the performance of the satellite and of the operations of the ground segment was carried out with great success. After that, ESA delivered the responsibility to operate the mission to the consortium led by Willy Benz.

CHEOPS is currently in transition to routine scientific operation, which is expected to start at the end of april. The scientists have started to observe some of the “initial science objectives”, a selection of stars and planetary systems chosen to show the potential of what the mission will be able to achieve.

This selection includes a “hot super-Earth” known as 55 Cancri e, which is covered in an ocean of lava, as well as the “warm Neptune” GJ 436b, which is losing its atmosphere due to the strong radiation of its parent star. Another star on the list of the early observatons with CHEOPS is a white dwarf, the first object in ESA’s Programme for Invited Observers.

CHEOPS is an ESA mission carried out in association with Switzerland, with a consortium led by the University of Berne, and with important contributions from Austria, Belgium, France, Germany, Hungary, Italy, Portugal, Spain, and the United Kingdom.

ESA is the designer of the CHEOPS mission, and has managed the acquisition and testing of the satellite, its launch, the full launch phase and initial operations, placing it in orbit, and the Invited Observers’ Programme. The consortium of 11 member states of ESA directed by Switzerland supplied essential elements of the mission. The main contractor for the design and construction of the space probe is Airbus Defence and Space in Madrid, Spain. The consortium of the CHEOPS missions runs the Centre of Operations of the Mission situated at INTA, in Torrejon de Ardoz, near Madrid, Spain, and the Centre of Science Operations, situated at the University of Geneva, Switzerland. 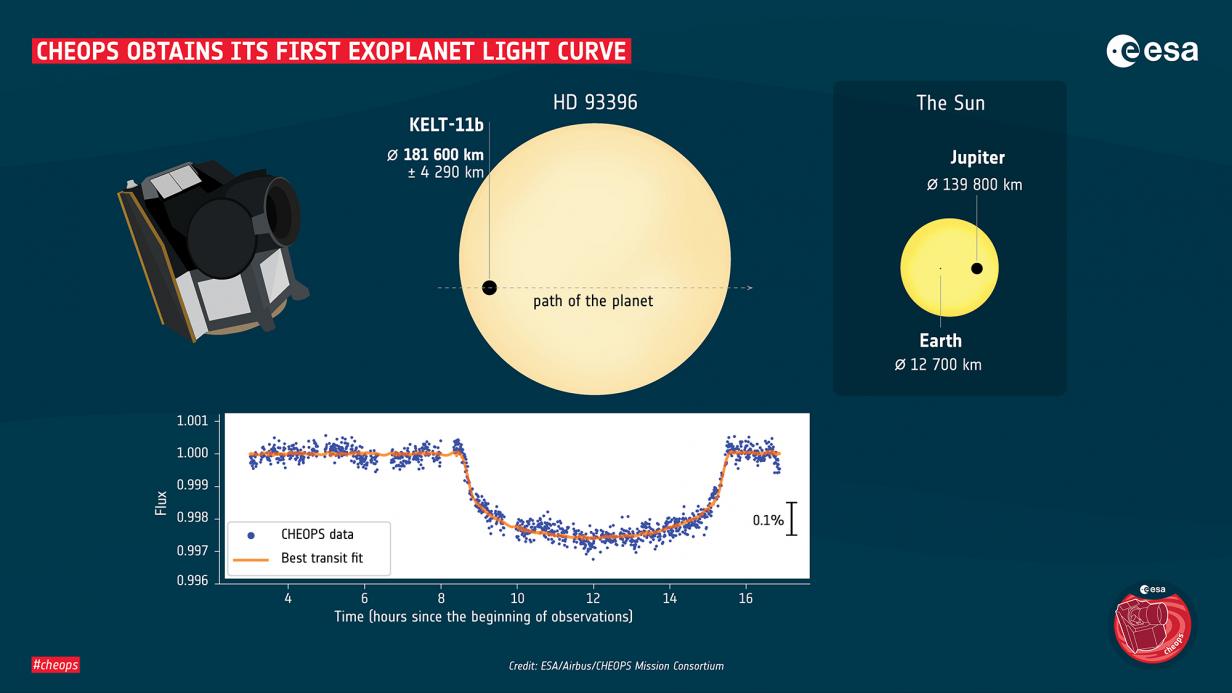