“Among the scientific institutes” he commented, “we want everybody to be successful in the enterprises which they initiate, and the projects they have. However we maintain the capacity and the goodwill of all the authorities and at all levels in the Spanish state so that if there is a decision to bring the telescope to the Canaries, the Spanish Government, the Government of the Canaries, the Cabildos, and the Municipal councils are all aligned in order to receive this telescope and we have all the necessary plans at all levels, the people, the speed, the systems, absolutely everything is ready if they want to come”

“The scientific activity of the Institute” said the Minister “is increasing year by year, and keeps on surprising us. This gives the Governing Council full satisfaction. We have discussed the future projects, which are many and international, in which we can try to help with the international phases if necessary. We have gone through the more administrative tasks, and confirm that the accounts are kept with precision and cleanliness, and we have seen what could be the future investments by the different governments involved. The Instituto de Astrofísica de Canarias remains one of the best in the world in this speciality”

The Councillor for Economy, Knowledge and Employment of the Government of the Canaries, Carolina Darias, in her first act in this post, and representing the President of the Government of the Canaries, also expressed, during the press conference, institutional support and as far as is possible economic, for the IAC.”The Instituto de Astrofísica de Canarias “she said, “is a reference point of excellence in the Canaries, in this case of scientific excellence. In my view knowledge feedback is particularly important, and how it affects our immediate environment” She expressed the positive attitude on behalf of the Government to permit other major infrastructures to come to the Canaries, which now has the Observatories of Teide and of the Roque de los Muchachos, and to help in the field of technological training. “After all, knowledge is the way forward. The sky has been a universal common heritage for all of humanity and for the major advances which it has brought about. For this reason all our support and availability, naturally within the limits of the budget”

“For the IAC, this meeting of the Governing Council is particularly important” stressed the Director of the IAC Rafael Rebolo when he addressed the press conference, “because in opens a new phase on many fronts, and we need the support of the new authorities. I think that we have it. This is the main message. We have the institutional support of the Councillor, as well as of the Minister, and we have many important plans, above all in the context of the major installations in our observatories. I feel encouraged to continue with the task in hand, and am sure that in the coming months, with the new teams in place in the Cabildos, we will be able to carry out many programmes which we have initiated, both in Tenerife and in the Island of La Palma.

The Report of the Director of the IAC

The Director of the IAC presented his report about the progress of the Institute to the Governing Council, noting specifically the scientific output, with more than 600 articles in the top international refereed journals, and the new instrumentation, for the Gran Telescopio Canarias (GTC) mainly to provide it with Adaptive Optics, as well as instruments for the Extremely Large Telescope (WELT) in Chile, as well as participation in other telescopes, both ground- and space-based, which include technology in the visible, infrared, and microwaves. The IAC continues to develop an extensive doctoral programme in the University of La Laugna, with over 70 doctoral students funded by projects of the Institute, and to develop its programmes of technological training, and transfer, in collaboration with the Cabildos of Tenerife (IACTEC) and La Palma (CATELP)

He also reported on the state of the negotiations for large telescope projects. As for the European Solar Telescope (ESTI the Governing Council showed its agreement to intensify ministerial contacts with the countries of the EST consortium with the objective of forming an ERIC (European Research Infrastructure Consortium) to carry out the construction and operation of the telescope at the Canary Island Observatories. He also mentioned progress with the Cherenkov Telescopes, and with the new robotic telescope, as well as covering the current situation with respect to the TMT.

At the meeting the accounts for 2018 and 2019 were approved, as was the budget for 2020, for 18.797 K€ of which 13.156 K€ will come from the Administration of the State, and 5.640 K€ from the Autonomous Community. If this budget goes ahead, this will imply that it will exceed for the first time, and after 12 years, the budget for 2008, just before the economic crisis. Rafael Rebolo also noted the competitive funding which the IAC also received, and particularly the programmes financed from the European Funds for Regional Development (FEDER)

The Observatories of the Instituto de Astrofísica de Canarias (IAC) and the Gran Telescopio CANARIAS (GTC) are part of the network of Singular Scientific and Technical Infrastructures (ICTS) of Spain. 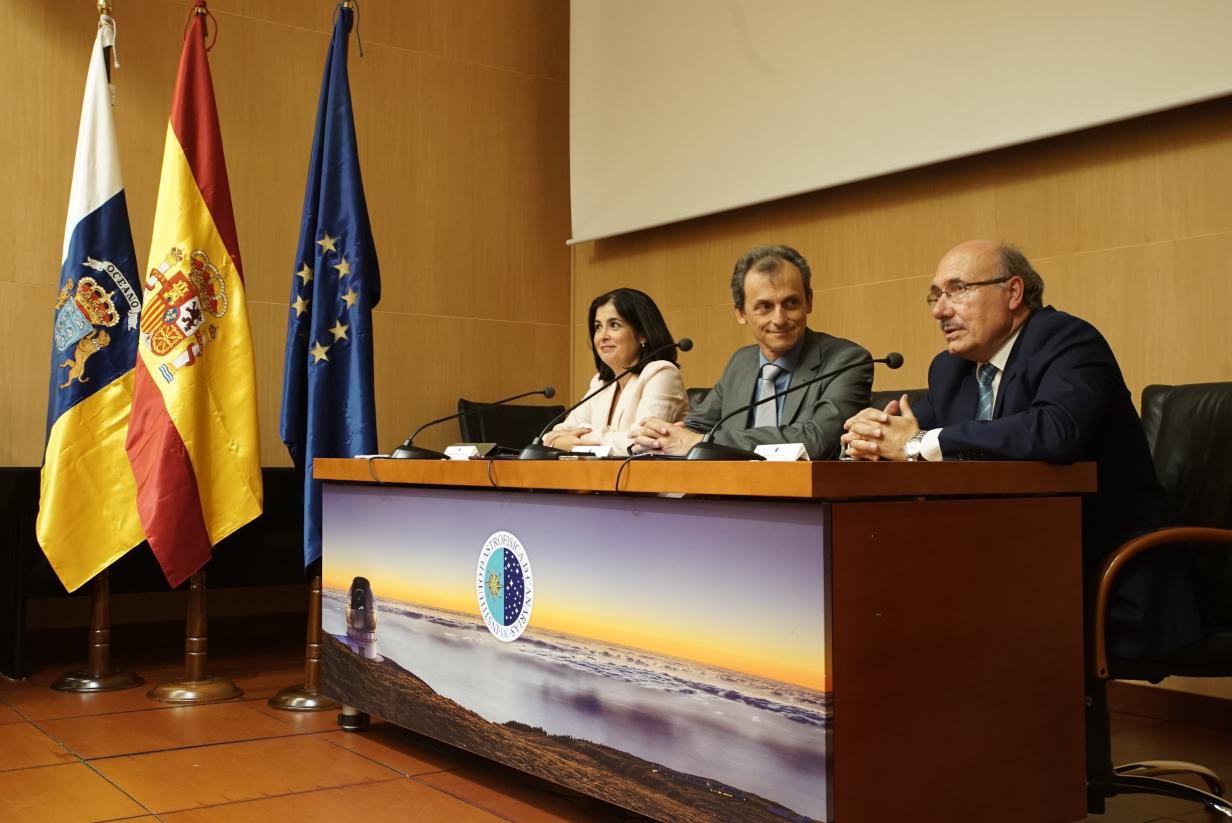