The book cover of “Observing the Sun from Tenerife. Image: Daniel López/IAC
Advertised on
28/01/2020

“The latitude of the islands, Teide, and the trade-winds have contributed to the story of the Sun in Tenerife”. This phrase by solar physicist Manuel Vázquez Abeledo was noted during the presentation of his most recent book Observing the Sun from Tenerife. An adventure above the sea of clouds (just in Spanish) by another solar physics from the Instituto de Astrofísica de Canarias (IAC), his friend and colleague José Antonio Bonet, who gave a summary of it. The event took place last Friday at the Museum of Science and the Cosmos, of Museums of Tenerife, in La Laguna in which, as well as the author and Bonet, participated Rafael Rebolo, director of the IAC, Javier Licandro, coordinator of research of the Institute, and Héctor Socas, the Director of the Museum.

Manuel Vázquez Abeledo “has been a pioneer of Solar Physics in Spain” and his contribution has ensured that this field is currently “a very powerful line of research in the IAC”, said Rafael Rebolo. He added that the Solar Group in the Institute is numerous, comprising astrophysicists and engineers with a great deal of experience in Solar Physics, from the ground or from Space, and for this reason it is leading the project to build the European Solar Telescope (EST) which will be installed in the Canaries.

Javier Licandro pointed out that the following generations of solar physicists at the IAC owe it to Manuel Vázquez that they are at a centre which has the privileges of the iAC, and he thanked him for having led the way, and left a record by writing the book he was now presenting. Héctor Socas reminded us that Vázquez had been the director of the doctoral thesis of Valentín Martínez Pillet, currently the Director of the National Solar Observatory of the United States, and leader of the Daniel K. Inouye Solar Telescope (DKIST) to be installed in Hawaii.

From the Guanches to LEST

The audiovisual presentation by José Antonio Bonet started, as does the book by Manuel Vázquez Abeledo, with an allusion to the “mountain of the Guanches” and to the first climbs of Teide, followed by the first scientific expeditions until those of the XIX century. He cited the intellectual José Viera y Clavijo, who said “It is the destiny of Teide throughout the ages to be considered the site in the world most apt for observations of the sky and the atmosphere”, and he reminded us that this great Canary author had been a witness to an aurora borealis visible from the hills of Taganana, which he described in writing, and which is in Vazquez’s book. Bonet also took note of Juan Fernández de Valderrama y Aguilar, an astronomer from Santa Cruz de Tenerife, unknown until the recent publication of the book about him by Manuel Vázquez together with Jorge Sánchez Almeida.

It was in the XIX century that astronomical and meteorological interest in solar radiation was aroused, and expeditions to Tenerife were launched, such as that of Charles Piazzi-Smyth (1856) and Knut Angström (1895 and 1896). In the early XX century the Meteorological Observatory of Izaña was founded, and there were expeditions such as that of Jean Mascart and Gustav Müller (1910) but those studies were interrupted by wars.

It was in 1959, to observe the total solar eclipse whose zone of totality passed through the Canaries, solar physicists came from all over the world, that the Teide Observatory was set up. A little later saw the arrival of Francisco Sánchez, the Founding Director of the IAC, who studied the conditions for an astronomical observatory, and installed the first telescope, to study the zodiacal light. The sixties saw international collaboration in solar site testing, and the founding of the Joint Organization for Solar Observations (JOSO) led by the German solar physicist Karl Otto Kiepenheuer. In 1963 the Spanish Jesuit Juan Casanovas created the Section of the Solar Group at the Teide Observatory, and started site testing in the Canaries. After the last campaigns in the islands during the 70’s the idea of building an observatory at the summit of Teide was suggested, but was finally rejected. In 1977 Manuel Vázquez Abeledo became the new coordinator of the Solar Section of the Teide Observatory, where Helioseismology to observe the solar interior was also started.

Bonet gave a run through the history of the solar telescopes at the two Observatories in the Canaries, even though it was the Teide Observatory which would host the majority of them, starting with the Razdow telescope, the first at Izaña. He made play with the German VTT, installed in 1986, and the start of the technological era of electronic detectors and the development of adaptive optics. He also mentioned the Swedish Solar Tower (1986) at the Roque de los Muchachos Observatory in La Palma, with which spectacular images of the solar granulation have been obtained. He reminded us of the International Agreements on Astrophysical Matters of 1979, and the official inauguration of the Observatories in June 1985.

Bonet ended his talk by discussing the need for solar telescopes with high spatial resolution (large apertures), time resolution (efficient detectors) and spectral resolution (large light dispersion). He highlighted the first Large European Solar Telescope project (LEST) which failed at the beginning of the 90’s due to lack of funding, and the project currently in the development phase, the European Solar Telescope (EST) with a 4 m mirror, a telescope in which 17 countries are participating.

SUMMARY OF THE bOOK

The Canary Islands, an archipelago in the Atlantic. In principle nothing to pick them out for an outside observer. However since the beginning of history they have drawn the attention, first of curious sailors and later of European Scientists. And this was due in large measure to the Sun, Teide, and the trade-winds.

Our star played an essential role in native mythology, and in the production of a calendar to organize agriculture. The trade winds, as they butt up against the islands with greatest elevation, form a sea of clouds, above which there is a mass of almost turbulence-free air, with thousands of hours per year to observe the Sun. In one of the islands, Tenerife, there was a mountain, Teide, which many thought was the highest on the planet, completely uninhabitable due to its conditions. In the era of the earliest navigations from Europe, the so-called Fortunate Isles became legendary.

Together with the scientific method arrived the era of measurements with telescopes and the first meteorological instruments. And no other place near to Europe and the tropics can compete with the Canaries. In addition the Canary Islands already had a network of ports which allowed good navigation with the main European nations and the Península. Meteorology and the newborn Astrophysics were to collaborate to use Teide and other nearby mountains, as probes to study the terrestrial atmosphere and the solar surface. As a result we can be proud today that we have on our mountains some of the best installations for studying the Sun.

Manuel Vázquez Abeledo, Doctor in Physical Science and author of several books of scientific outreach, gives us, in this book edited by the IAC, a personal vision of all these efforts, reminding us that all of the factors mentioned would have led nowhere without the presence of great personalities mingling with great unknown heroes. This book is an example of rigorous popularization sprinkled with curious anecdotes, and images illustrating all the adventure which was developed, in essence, above the sea of clouds of Tenerife and La Palma. 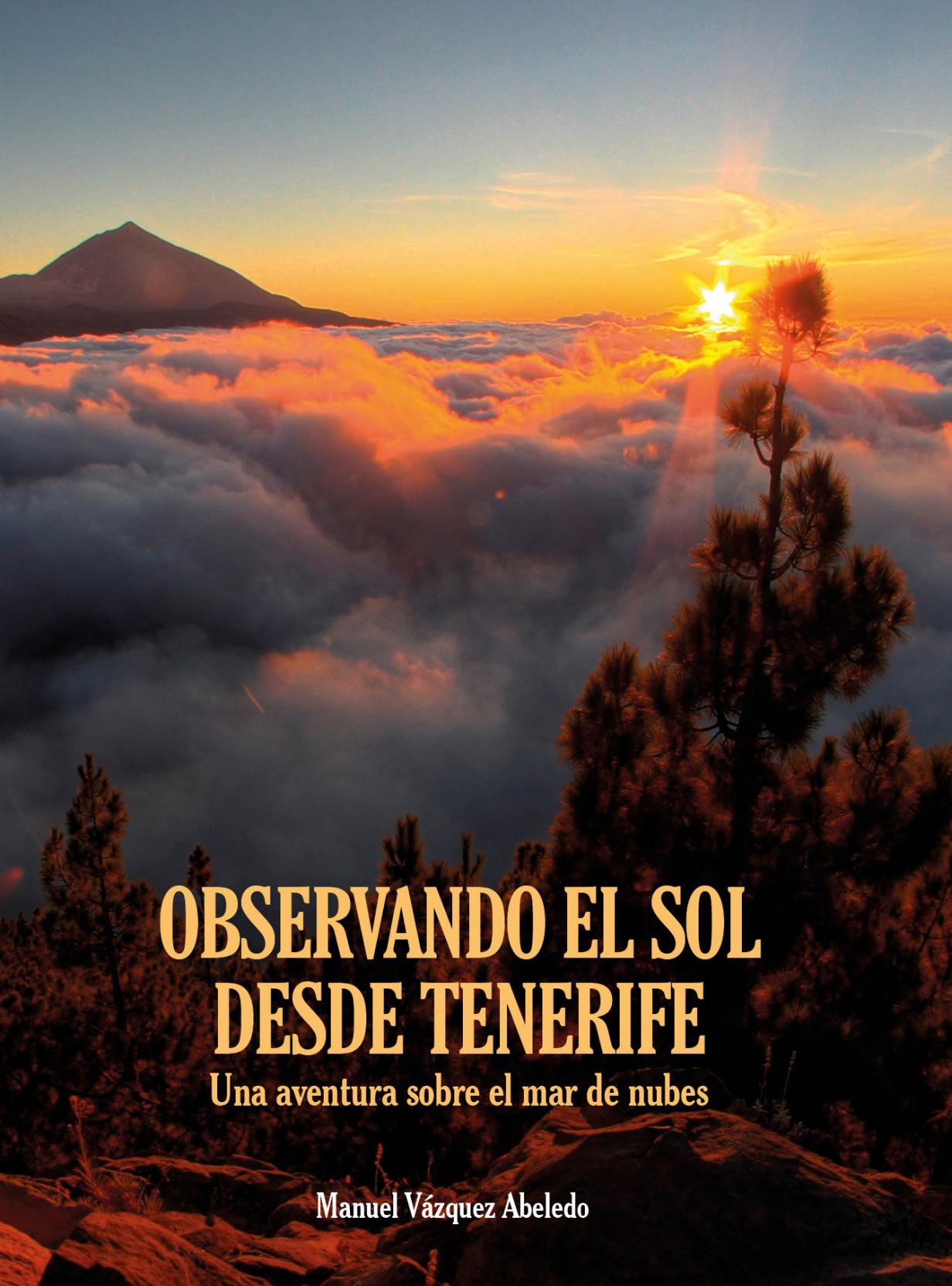