The Cabildo of La Palma, the IAC, and Starmus join forces to bring the Festival to La Palma in 2022

The President of the Cabildo de La Palma, Mariano Zapata, the Councillor for Culture and Historical Heritage, Jovita Monterrey, the Director of the IAC, Rafael Rebolo, and the promoter of Starmus, Garik Israelian. Credit: Cabildo de La Palma
Advertised on
11/06/2021
Authors
SCIENCE COMMUNICATION AND OUTREACH UNIT

Three organizations have today agreed to work jointly to ensure that the island will be the next host to the Starmus Festival, an international multidisciplinary event which unites science, art, and music.

The president of the Cabild of La Palma, Mariano Zapata, the councillor for Culture and Historic Heritage, Jovita Monterrey, the Director of the Instituto de Astrofísica de Canarias (IAC) Rafael Rebolo, and the director and founder of the Starmus Festival, Garik Israelian met today in Santa Cruz de La Palma and agreed to continue collaborating so that the next edition of the Starmus Festival, in 2022 will be celebrated entirely in La Palma, during a single week.

The President of the Cabildo, Marian Zapata, said “We are to be congratulated because Starmus is thinking of La Palma again. It is basic for us to bring this great event back to our island. It has not been celebrated in the Canaries since 2016 and I think that the unity among the administrations could make it possible for Starmus to be with us next year. Now we have a lot of work to do so that all the levels of administration work together."

For the Councillor of Culture and Heritage Jovita Monterrey “For La Palma Starmus will be a motor for reactivation, to put the island on the international map. It will project science, but this will be linked to a cultural project for La Palma, and this will mean work for Education and science outreach, as well as projecting our sky as a universal heritage”. Jovita also said that next summer or autumn 2022 the inhabitants of La Palma will have "a great Starmus, that it will be celebrated every two years, and that this island will be known via the most important festival of science”.

The promotor of Starmus and IAC researcher Garik Israelian stated “Within two years we will be returning to the Moon and in ten years we will also arrive on Mars, this is a decade of space, astronomy and technology, and it is very important to start it with Starmus in La Palma. We are going to have a very ambitious programme. We can have the best Starmus of all of those we have done. La Palma is the island of the stars, there is no other place than La Palma where such an incredible festival could be celebrated”. Israelian also explained that all the activities will be carried out in a single week, and that the Festival will be called Starmus La Palma.

The Director of the IAC, Rafael Rebolo pointed out that Starmus is “An initiative which is unique in the world, linking science with music. The objective is to bring these two worlds together, because although they may seem far apart they really are close, in a singular, unique event, so tha today we have decided to do everything possible to bring Starmus to La Palma nex year”. Rebolo also noted that 2022 is a special year because it is the year of celebration of the 40th anniversary of the Instituto de Astrofísica de Canarias. “We will celebrate this event in a number of ways, and our first action will be to work shoulder to shoulder with the Cabildo of La Palma so that Starmus can be a reality, and in La Palma, next year”

The biggest science festival in the world

Starmus started in 2011 and its first three editions were in Tenerife and La Palma. The Festival then moved to Norway and Switzerland, and next September it will celebrate its sixth edition in Armenia. Starmus has become consolidated as a high level reference point on the international agenda of events related to science and outreach. Its objective is to bring together scientists, artist, and astronauts on a world scale, to share the most advanced scientific discoveries, to discuss them, and to inspire new generations of scientists and explorers.

During the ten years of its existence Starmus has brought together astronauts of the Apollo missions, including Neil Armstrong and Buzz Aldrin, cosmonauts such as Alexei Leonov, physicists such as Kip Thorne and Stephen Hawking, biologists such as Richard Dawkins, economists such as Joseph Stiglitz, popularizers such as Neil deGrasse Tyson and Brian Cox, and musicians such as Brian May, Hans Zimmer, Brian Eno, Tangerine Dream and Sarah Brightman. Many of them have been awarded the Stephen Hawking Medal for Outreach, an award granted by the Festival.

Starmus is a festival strongly linked to La Palma from the start. In the first three editions the Island hosted one of the most emblematic moments of the Festival, the panel discussion “108 minutes” (the duration of the first trip into space by Yuri Gagarin in 1961). This was a high level discussion, both physically, because it took place in the Roque de los Muchachos Observatory within the dome of the Gran Telescopio Canarias, and intellectually because it brought together the privileged minds which have participated in Starmus. Some of those personalities took part in the act of setting the first stone of the Visitors’ Centre at the Roque de los Muchachos in 2016.

The Starmus Festival was also the seed of the “Walkway of the Stars of Science of La Palma” on the Maritime Avenue of the capital, which is unique in the world. The first person to receive a star in the walkway in June 2016 was the theoretical astrophysicists Stephen Hawking, who visited the island on various occasions. In the Starmus of the same year, the second star was awarded to Alexei Leonov, the first man to make a space walk. 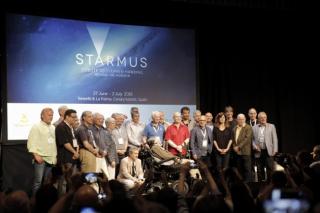 The third edition of the Starumus festival began this aftenoon in Tenerife with the welcome address of Garik Israelian, IAC researcher, founder and director of Starmus, who said that the motto of the festival this time is Beyond Starmus "because it is a special event in honour of Stephen Hawking". He was followed by Rafael Rebolo, the Director of the Instituto de Astrofísica de Canarias (IAC) who made the point that "we are very proud of the work of Stephen Hawking, and for that reason we have named him Honorary Professor of the IAC". He also stressed the potential of the Canary Islands for 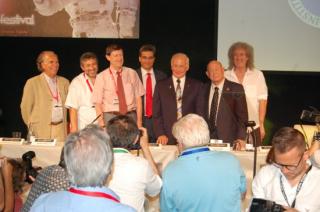 The Instituto de Astrofísica de Canarias (IAC) is collaborating with this multidisciplinary festival for Astrophysics and Space SciencesThe second event, which has the slogan "Beginnings: the making of the modern cosmos" will take place in Tenerife and La Palma from 22 to 28 September 2014 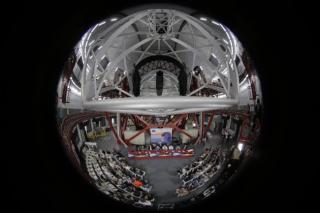 Press release
“108 minutes” at the GTC

Invited speakers at STARMUS debated in La Palma about the threat by asteroids, climate change, and scientific education. 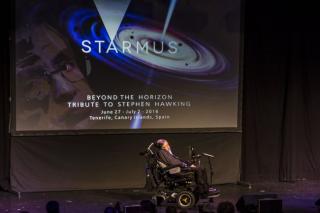 The cosmologist and theoretical physicist Stephen Hawking, who was recently named Honorary Professor of the Instituto de Astrofísica de Canarias (IAC) was the key figure of the first session, -moderated by Brian Cox, physicist and science popularizer on the BBC- on the third day of the Starmus Festival in Tenerife. In his talk, with the title “A brief History of Mine” he began by describing his childhood, and his years at school and at university, until he obtained his studentship at Cambridge, to study for his PhD in cosmology. He explained that during his student years “they diagnosed my