Dwarf galaxies: key laboratories for the study of dark matter

An optical image of the Sculptor dwarf spheroidal galaxy (left) alongside an illustration of the gamma-ray signal that might arise from dark matter annihilating within the galaxy (right). Image left: Giuseppe Donatiello. Image right: NASA/DOE/Fermi LAT
Advertised on
16/05/2022 - 16:00
Authors
SCIENCE COMMUNICATION AND OUTREACH UNIT

The journal Nature Astronomy publishes today, in its collection of reviews dedicated to dwarf galaxies, a new article written by Giuseppina Battaglia, researcher at the Instituto de Astrofísica de Canarias and the University of La Laguna, and Carlo Nipoti, researcher at the University of Bologna. The study describes the latest results on the search for dark matter in Local Group dwarf galaxies.

Dark matter in dwarf galaxies is the subject of a review article published today in the journal Nature Astronomy in its living collection of articles that, from December 2021, is dedicated to the smallest galaxies, both in mass and size, in our Universe. Dwarf galaxies are the most numerous and the first to form, so they are considered key laboratories for testing a large number of open questions in astrophysics, including the existence and properties of dark matter.

Since several decades, the study of the dynamics of galaxies has led scientist to make the hypothesis that only a minority of their mass is formed by luminous matter (matter made by "ordinary" particles) and that the majority is composed by "dark matter", which does not emit or absorb electro-magnetic radiation and whose nature is still unknown. In particular, in dwarf galaxies, the mass in dark matter can be dozens to thousands of times that in luminous matter.

The review published today concerns in particular the motions of stars in those dwarf galaxies that inhabit the Local Group, our neighbourhood, and the use of such motions to infer the amount of dark matter in these galaxies and how it is distributed. “Given how close to us Local Group dwarf galaxies are, they are among the best systems in which to search for indirect signatures of the presence of dark matter from annihilation or decay,” says Giuseppina Battaglia, researcher at the Instituto de Astrofísica de Canarias (IAC) and the University of La Laguna (ULL) and co-author of the review. “But determining the properties of dark matter haloes in dwarf galaxies is important not only for investigating the nature of dark matter, but also to advance in our understanding of the formation and evolution of galaxies.”

“Importantly, according to the standard cosmological model, galaxies form in a bottom-up fashion, i.e, small galaxies form first, while the large ones are formed by a combination of the smaller ones merging together and accretion of matter,” noted Carlo Nipoti, researcher at the University of Bologna and co-author of the article. “In other words, dwarf galaxies would be the "bricks" with which the other cosmic structures are built."

Galaxy formation and evolution is a fundamental Astrophysical problem. Its study requires “travelling back in time”, for which there are two complementary approaches. One is to analyse galaxy properties as a function of red-shift. Our team focuses on the other approach, called “Galactic Archaeology”. It is based on the determination of galaxy 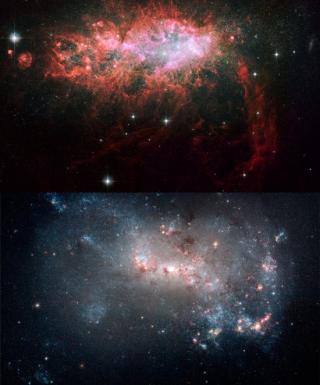 Central starbursts in galaxies are an extreme example of ongoing galaxy evolution. The outer parts of galaxies contain a fossil record ofgalaxy formation and evolution processes in the more distant past. The characterization of resolved stellar populations allows one a detailed study of these topics.In our study we used the Hubble Space Telescope to observe the outerparts (up to 8 scale radii) of NGC 1569 and NGC 4449, two of the closest and strongest dwarf starburst galaxies in the local universe, to characterize their stellar density and populations, and obtain new insights into the 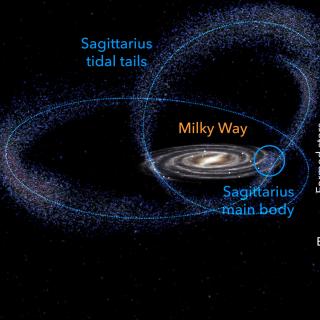 The European Space Agency's Gaia mission is revolutionising our understanding on how the Milky Way, the spiral galaxy we inhabit, has formed and evolved. Gaia is measuring the apparent luminosities, colours, positions, motions, and the chemical composition of an unprecedentedly large number of individual stars in our Galaxy. In particular, combining apparent luminosities with distances to these stars, here we have computed the intrinsic luminosity of 24 million stars within a sphere of 6500 light years around our Sun. Comparing such luminosities and colours with accurate models of stars we