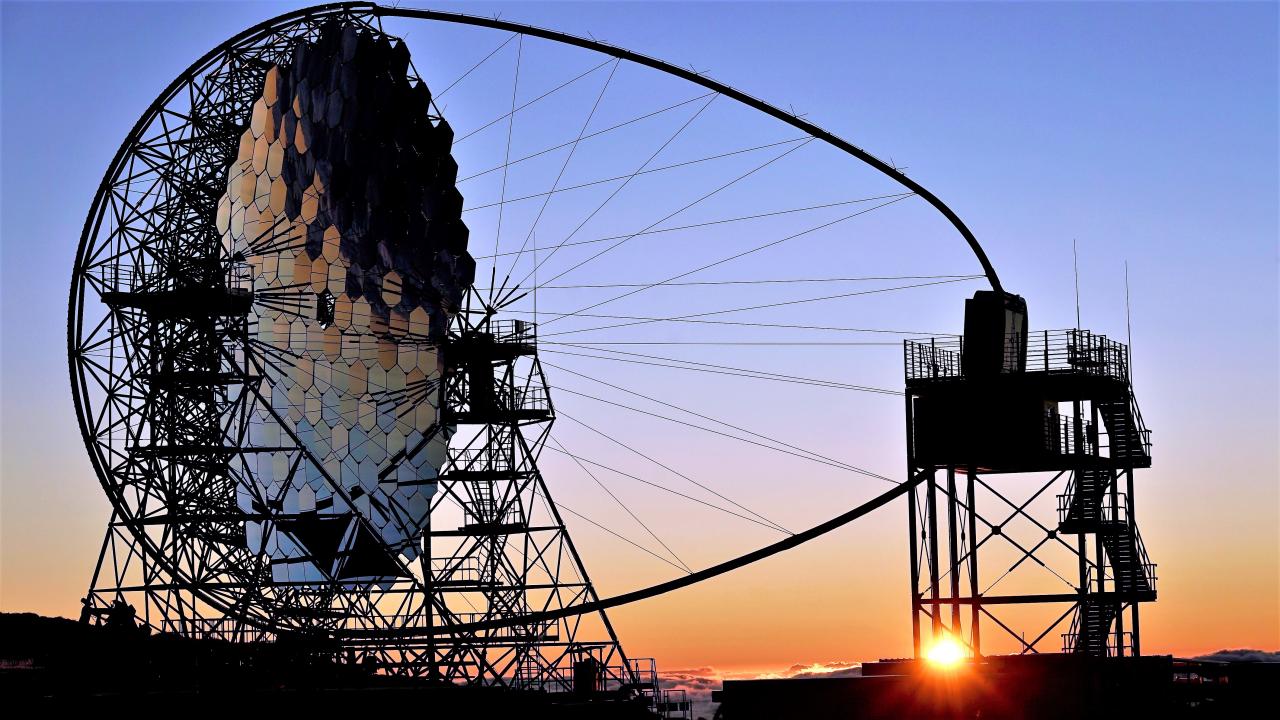 The first prototype of the Large-Size Telescope (LST) of the Cherenkov Telescope Array (CTA), the LST-1, located at the Roque de los Muchachos Observatory (Garafía, La Palma), has detected an emission of very high-energy gamma rays from the Crab Pulsar, a neutron star at the centre of the nebula of the same name.  This observation confirms the successful operation of this telescope, which is being commissioned.

Pulsars are very rapidly rotating and strongly magnetized neutron stars that emit light in the form of two beams, which can be observed from Earth only when passing our line of sight. While detecting the strong and steady emission or outbursts of gamma-ray sources with Imaging Atmospheric Cherenkov Telescopes (IACTs) has become routine, pulsars are much more challenging to detect due to their weak signals and the typical dominance of the foreground gamma-ray signal from the surrounding nebulae. Despite hundreds of observations hours by IACTs around the globe, only four pulsars emitting signals in the very high-energy gamma-ray regime have been discovered, so far. Now that the LST-1 has shown that it can detect the Crab pulsar, it joins the field of telescopes capable of detecting gamma-ray pulsars, validating the timestamping system and the low-energy performance of the telescope

The data set collected includes 11.4 hours from eight observation night, between January and February 2020, and are part of the work being done to verify the telescope performance and adjust its operating parameters.

"This milestone shows us that the LST-1 is already performing at an extraordinary level, detecting a challenging source in record time," says Masahiro Teshima, Director of Max-Planck-Institute for physics in Munich and Principal Investigator of LST. "Pulsars are one of the key scientific targets of the LSTs, and it's exciting to imagine what we'll be able to achieve when the telescope is fully commissioned and operational”.

"The commissioning of LST1 is very advanced and has shown that the telescope is fulfilling the necessary technical requirements, which will allow for a promising scientific exploitation in the near future", points out Mónica Vázquez, scientific responsible of the LST at the Instituto de Astrofísica de Canarias (IAC). "This result is very encouraging as currently we are preparing the construction of 3 more LST in the Roque de los Muchachos Observatory".

Juan Cortina, scientist at the Centro de Investigaciones Energéticas, Medioambientales y Tecnológicas (CIEMAT) and co-principal investigator of the LST, highlights the contribution of the many Spanish scientific institutions participating in the project: "The Spanish CTA community has made this possible; after so many years of work by all the groups, it is gratifying to see how our telescope is responding as we expected".

About the LST and CTA

The Large-Sized Telescope (LST) is one of three types of telescope to be built to cover CTA’s full energy range (20 GeV to 300 TeV). LSTs arranged at the centre of both the northern and southern hemisphere arrays will cover the low-energy sensitivity between 20 and 150 GeV. Each LST is a giant 23 metre diameter telescope with a mirror area of about 400 square metres and a fine pixelized camera made of 1855 light sensors capable of detecting individual photons with high efficiency. Although the LST stands 45 metres tall and weighs around 100 tonnes, it is extremely nimble, with the ability to re-position within 20 seconds to capture brief, low-energy gamma-ray signals. The LST-1, the first telescope constructed on a CTA site, was inaugurated in October 2018 and has been undergoing commissioning testing ever since.The LST-1 recently passed the Critical Design Review (CDR) by the CTA Observatory (CTAO). It is expected to be the first telescope of this observatory in 2021.

CTA is a global initiative to build the world’s largest and most sensitive high-energy gamma-ray observatory with tens of  telescopes planned on two sites: one in the northern hemisphere on the island of La Palma, Spain, and the other in the southern hemisphere near Paranal, Chile. CTA will be the first ground-based gamma-ray astronomy observatory open to the world-wide astronomical and particle physics communities. It is expected to increase tenfold the number of known cosmic gamma ray sources. The CTA Consortium is composed of  more than 1500 members from 31 countries. 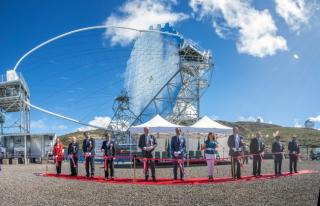 Press release
LST1: a new telescope that shines in the summit of La Palma

Its height is 45 m, and its diameter is 23 metres; it weighs close to 100 tonnes which can be moved in less than 20 seconds to capture the gamma rays emitted by the most energetic phenomena in the universe. This is the telescope which was inaugurated this morning at the Roque de los Muchachos Observatory, in the La Palma town of Garafia by the Nobel Laureate in Physics Takaaki Kajita, and by the Spanish minister Pedro Duque, among other outstanding scientific and political figures. 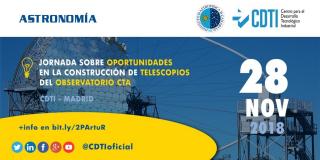 The CTA-North Observatory: a network of opportunities for Spanish industry

The Instituto de Astrofísica de Canarias (IAC) and the Centre for Industrial Technological Development (CDTI) are organizing a one day event in Madrid to inform about the opportunities offered to Spanish industry during the construction of the Cherenkov Telescope Array (CTA) in the northern hemisphere.

The CTA Observatory will be the global gamma-ray facility for the next decades. CTAO will be one fundamental pillar of the multimessenger astroparticle science. We present its framework, objectives and structure, with a special emphasis on the present phase of transition from concept development to construction of infrastructure and telescope array

Ground-based gamma-ray astronomy has had a major breakthrough with the impressive results obtained using systems of imaging atmospheric Cherenkov telescopes. Ground-based gamma-ray astronomy has a huge potential in astrophysics, particle physics and cosmology. CTA is an international initiative to build the next generation instrument, with a factor