TESS, Spitzer and the GTC detect a planet orbiting a white dwarf for the first time

With data from NASA’s TESS satellite, from the now retired Spitzer Space Telescope, and the Gran Telescopio Canarias (GTC) an international team of astronomers, with participation from the Instituto de Astrofísica de Canarias (IAC) has detected what appears to be an intact planet in orbit around a white dwarf, the dense remains of a star similar to the Sun, and only 40 % bigger in diameter than the Earth. This finding is published today in Nature magazine.

“Somehow WD 1856b got very close to its white dwarf, and managed to stay in one piece” says Andrew Vandenburg, Assistant Professor of Astronomy at the University of Wisconsin, Madison, and first author of the article. “The process of formation of a white dwarf destroys planets close to it, and any body which then goes too close normally is destroyed by the intense gravity of the star. We still have many questions about how WD 1856b reached its current orbit without falling prey to one of those fates” he adds.

TESS detected WD 1856b, which is at a distance of some 80 light years, towards the constellation of Draco. It orbits a cool quiet white dwarf whose diameter is around 18,000 km, could be as much as ten thousand million years old, and is a distant member of a triple star system.

When a star similar to the Sun has exhausted its fuel it puffs up to hundreds or even thousands of times its original volumen, and becomes a cool red giant. After that it blows off its outer layers of gas, losing as much as 80% of its mass, and the hot nucleus left behind becomes a white dwarf. “Any nearby object is swallowed during the expansion process, which in this case would have included D 1856b in its present orbit. For that reason astrophysicists think that the possible planet must have started out at least 50 times further from the star than its present orbit” suggests Felipe Murgas, an IAC researcher and a co-author of the article.

“We have known for a long time that after the birth of a white dwarf small objects not too close to it, such as asteroids and comets, can be scattered towards these stars. They are generally broken up by the strong gravity of the white dwarf and are converted into a disc of debris” explains Siji Xu, an assistent astronomer at the Gemini Observatory in Hilo, Hawaii. For that reason I was very excited when Andrew told me about this system. We have seen previously hints that the planets could also be scattered inwards, but this this seems to be the first time that we are seeing a planet which has made the complete journey intact”.

The team suggests a number of scenarios which could have pushed WD 1856b into an elliptical orbita round the white dwarf. This trajectory could have become more circular with time, as the gravity of the star stretched the object, causing huge tides which dissipated its orbital energy.

“The most probable circumstance involves several other Jupiter-sized bodies close to the original orbit of WD 1856b” explains Enric Pallé, an IAC researcher and another co-author of he article. “Other possible scenarios include a gradual gravitational perturbation by the other two stars in the system, the red dwarfs G229-20 A and B, during thousands of millions of years, or a fly-by of a rogue star which perturbed the system. But these, and other explanations are less probable because they need very specific conditions to achieve the same effects as the possible companion giant planets".

Jupiter-sized objects come in a large range of masses, from planets only a bit more massive than the Earth to low mass stars thousands of times the mass of the Earty. Others are brown dwarfs, which are objects half way between planets and stars.Astronomers usually use observations of radial velocity to measure the mass of an object, which can then give hints about its composition and natu¡rue. This method works by studying how an object in orbit pulls its star, and alters the colour of its light. But in this case the white dwarf is so old that its light has become too faint, and without the characteristic features used by scientists to detect notable changes.

To resolve this difficulty the team observed the system in the infrared using Spitzer, only a few months before the telescope was decommissioned. A brown dwarf or a low mass star wouild emit its own infrared light. This means that Spitzer would register a transit brighter than if the object were aplanet, which would block all the light. When the researchers compared the Spitzer data with the observations of the transit in the visible taken with the Gran Telescopio Canarias (at the Roque de los Muchachos Observatory, Garafía, La Palma, Canary Islands) they observed no detectable differences. This, combined with the age of the star, and other information about the system, led them to conclude that WD 1856b is very probably a planet with a mass no greater than 14 times that of Jupeter. Future research and observations can confirm, or deny, this conclusion.

“Because the white dwarf emits little light, and the transit lasts for around 8 minutes, obtaining transit data which le tus measure the depth of the transit very accurately was a challenge for many current instruments. Fortunately the GTC and its team could make the measurement, which was crucial for this discovery” says Hannu Parviainen, an IAC researcher and a co-author of the article. But not only large telescopes were used in this work. Also the instrument of the Japanese-Spanish MuSCAT2 project, mounted on the Carlos Sanchez telescope (1.52m) of the Teide Observatory (Tenerife) helped to set limits to the depth of the transit at different wavelengths.

Finding a possible planet orbiting close to a white dwarf has led the researchers to consider the implications for the study of the atmospheres of small rocky planets in similar situations. This is because the tiny size of the white dwarf makes it easier to characterize the atmosphere of the planet. For example, let us take the case of an Earth-sized planet within the range of orbital distances around WD 1856, in which there may be water on its surface. The astrophysicists calculate that the coming NASA/ESA James Webb Space Telescope could detect water and carbon dioxide in these hypothetical planets after only five transits.

There is no current evidence that there are other planets in the system, but it is possible that there are further planets which have not yet been detected. They could be in orbits whose periods are longer than the time TESS has observed that zone, or be inclined in such as way as not to produce transits. Also the white dwarf is so small that the probability of catching transits of planets further out in its system is very small. 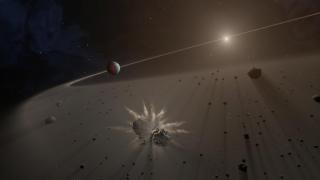 The study, led by Paula Izquierdo, a doctoral student at the Instituto de Astrofísica de Canarias (IAC) and the University of La Laguna (ULL), has gone deeply into the analysis of this exceptional white dwarf, which shows periodic transits produced by fragments of a shredded planetesimal. The observations used for this research were obtained with the Gran Telescopio Canarias and with the Liverpool Telescope. 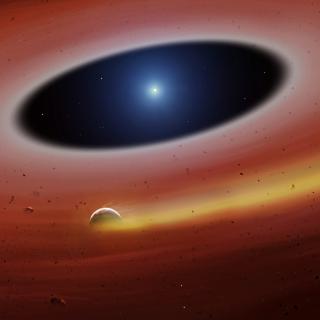 Numerous exoplanets have been detected around Sun-like stars. These stars end their lives as white dwarfs, which should inherit any surviving planetary systems. In fact, many white dwarf stars show signs of having accreted smaller bodies, implying that they may host planetary systems. A small number of these systems contain gaseous debris discs, visible through emission lines. Here, we report a stable 123.4-minute periodic variation in the strength and shape of the Ca II emission line profiles originating from the debris disc around the white dwarf SDSS J122859.93+104032.9. We used numerical