Touching an asteroid and coming back: OSIRIS-REx and Bennu

This Tuesday October 20th at around 23.12 hr (Canary time) the NASA space probe OSIRIS-REx will make its first attempt to collect samples from the asteroid (101955) Bennu. The Instituto de Astrofísica de Canarias (IAC) has played an active role in the mission since 2011. Researchers Julia de León, Javier Licandro, Eri Tatsumi and Juan Luis Rizos, who are members of the science team of OSIRIS-REx will be present telematically at the meeting organized by this NASA mission so that the science team can follow in real time this dangerous maneuvre¸ using the SamCam camera on board the probe. This event will be one of the most important milestones in the mission.

The prime objective of OSIRIS-REx is the collection of material from the surface of the primitive asteroid Bennu to be examined on Earth. Bennu is an asteroid containing material which has undergone little change from its origin more than 4,000 million years ago. As are other asteroids of this type, it is rich in hydrated minerals and complex organic molecules, so that studying this material just as it is, on the asteroid can give us clues to inderstand how these materials reached the Earth when young, and how they gave rise to the living beings which inhabit Earth today.

The OSIRIS-REx probe took off from Cape Canaveral on September 8th 2016. It arrived at the asteroid at the end of 2018, and since then it has been in orbit around it, carrying out various studies of its composition, structure and behaviour. The Solar System group at the IAC is part of the team which is working with the cameras on board the probe (called OCAMS) and has participated actively in the calibration and the science which are resulting from its images, and which have also been important for selecting the site where there will be an attempt to collect samples.

For de León and Licandro, who were present in person at the launch of the mission in 2016, it is a historic moment. “We have arrived, we have studied, and now comes the difficult part, to collect a bit of Bennu to bring back to Earth for study”. To do this entials great difficulty. The probe has to go down to an object barely 500m big, which is moving at 10,000 km/h, with almost no gravity and with a surface covered with rocks, between a few centimetres and tens of metres in size. Once there, the probe must make a maneuvre called “Touch-and-Go”, which is highly risky. The probe must make an approach at very low velocity and open a mechanical arm 3.35m long, which has at its tip a mechanism for taken samples, ensure that this rests on the surface for a few seconds, avoiding contact with any rock which could damage it. This is a real challenge gvien that, in Licandro’s words “Bennu is a huge lump of rock”. The sample collector can pick up grains up to 2 cm big, so that it must make contact at a dusty spot with plenty of small sized material.

OSIRIS-REx will try to take a sample of material from inside a cráter 140m in diameter called Nightingale. It is a zone barely 16m in diameter where there are a lot fewer rocks than on  the rest of the surface, and there appears to be sufficient dust. It is hoped to collect a sample of at least 60 grammes. If it doesn’t manage to collect enough, the probe is prepared for making another couple of tries. After that OSIRIS-REx will continue to orbit Bennu and will start its return journey in 2021, taking its precious cargo in a sealed, evacuated jar, which they plan to bring down in the Utah desert in 2023.

NASA will be broadcasting live the “Touch and Go” maneuvre, from 22.00 hr Canary Time, from its NASA TV portal (https://www.nasa.gov/nasalive).

For more information about OSIRIS-REx and Bennu  you can visit 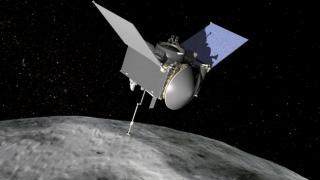 The launch of the OSIRIS-REx probe, planned for 8th September, will study Bennu, one of the oldest asteroids in the Solar System. It could yield clues to its origin and to life on Earth. Researchers from the Instituto de Astrofísica de Canarias (IAC), Javier Licandro and Julia de León are members of the group of scientists who will study this asteroid. 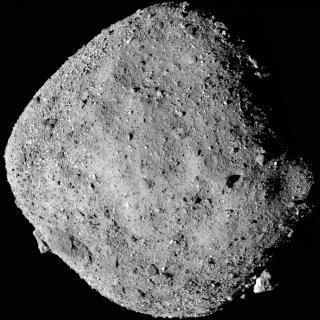 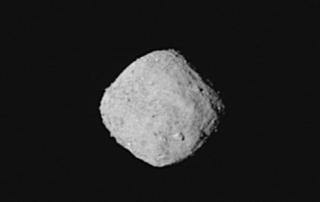 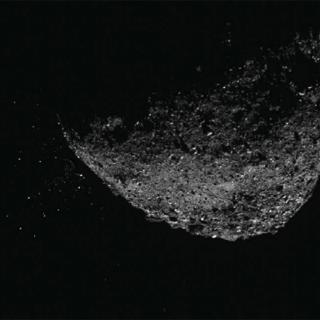 The NASA OSIRIS-REx mission will retrieve a sample of the carbonaceous near-Earth Asteroid (101955) Bennu and return it to Earth in 2023. Photometry in the Eight Color Asteroid Survey (ECAS) filter system and Johnson–Cousins V and R filters were conducted during the two most recent apparitions in 2005/2006 and 2011/2012. Lightcurve observations

OSIRIS-REx Target Asteroids! is an award-winning citizen science project conducted as part of the Communications and Public Engagement program of the NASA OSIRIS-REx asteroid sample return mission. The project furthers the study of near-Earth asteroids (NEA) and promotes interest among the amateur astronomy community. The goal of Target Asteroids

NASA's OSIRIS-REx and JAXA's Hayabusa2 sample-return missions are currently on their way to encounter primitive near-Earth asteroids (101955) Bennu and (162173) Ryugu, respectively. Spectral and dynamical evidence indicates that these near-Earth asteroids originated in the inner part of the main belt. There are several primitive collisional

NASA's OSIRIS-REx mission is currently on its way to the asteroid (101955) Bennu. Bennu is a primitive asteroid, characterized by a dark surface composed mainly of carbon compounds, organic, and silicates altered by the presence of water. In addition, due to its proximity to the Earth, is classified as a potentially dangerous asteroid (PHA). Among

10
2018
Bibcode
2018DPS....5031218R
Refereed
Overcoming the Challenges Associated with Image-based Mapping of Small Bodies in Preparation for the OSIRIS-REx Mission to (101955) Bennu

The OSIRIS‐REx Asteroid Sample Return Mission is the third mission in National Aeronautics and Space Administration (NASA)'s New Frontiers Program and is the first U.S. mission to return samples from an asteroid to Earth. The most important decision ahead of the OSIRIS‐REx team is the selection of a prime sample‐site on the surface of asteroid

The OSIRIS-REx asteroid sample-return mission is investigating primitive near-Earth asteroid (101955) Bennu. Thousands of images will be acquired by the MapCam instrument onboard the spacecraft, an imager with four color filters based on the Eight-Color Asteroid Survey (ECAS): b‧ (473 nm), v (550 nm), w (698 nm), and x (847 nm). This set of filters

Establishing the abundance and physical properties of regolith and boulders on asteroids is crucial for understanding the formation and degradation mechanisms at work on their surfaces. Using images and thermal data from NASA's Origins, Spectral Interpretation, Resource Identification, and Security-Regolith Explorer (OSIRIS-REx) spacecraft, we show