A scientific team, led by the Max Planck Institute for Quantum Optics, with participation from the Instituto de Astrofísica de Canarias, confirms the high degree of precision of the new calibration system known as a “laser frequency comb” which could be the key to the detection of planets like the Earth. The study is published in the journal Nature Astronomy

The search for exoplanets is getting closer and closer to the aim of finding a planet like the Earth orbiting a star like the Sun in its habitability zone, that is at the right distance, not to near and not too far, so that liquid water can exist on its surface. A planet in its orbit gives a gravitational pull on its star which produces a small movement which astronomers can detect via small shifts in the wavelength of the spectrum of the star. This technique, known as the radial velocity method was used to discover the first exoplanets orbiting Sun-like stars, whose discoverers were awarded the Nobel Prize for Physics in 2019.

To measure these minute variations in the spectra of the host stars astronomers need extremely accurate spectrographs. The Instituto de Astrofísica de Canarias (IAC) has participated in a new study, led by the Max Planck Institute for Quantum Optics, which gives support to a technique which could be the key to the discovery of planets like the Earth. The team has tested a calibration system known as a “laser frequency comb”, a technique which won the Nobel Prize for Physics in 2005, which shows unprecedented short term accuracy.

“Until now, on long time scales of order years, a precision in velocity of around 80 cm per second had been shown, using other calibration methods, but this is still not good enough to find a twin of the Earth” comments Jonay González Hernández, a Ramon y Cajal research fellow at the IAC, and a co-author of the article. “In this study  we have demonstrated short term precision, over perios of hours, of one centimetre per second” he adds, “which opens the possibility of finding inhabitable planets like the Earth orbiting stars like the Sun, but we still have to demonstrate that this precision can be maintained for a long time".

“One of the tests which we have carried out is to observe the Sun’s light reflected from Ceres, a large asteroid in the Solar System” indicates Borja Toledo Padrón, a Severo Ochoa-La Caixa pre-doctoral student at the iAC, and a co-author of the research article. “In spite of many known effects of this dwarf planet we have been able to measure its absolute velocity to an accuracy of 3 metres per second, which is a demonstration of the precision of this calibration system” he concludes.

To carry out this work, in which IAC researchers Rafael Rebolo and Alejandro Suárez Mascareño also participated, it was necessary to combine two LFC (Laser Frequency Comb) systems coupled to the HARPS instrument which works on the 3.6m telescope of the European Southern Observatory (ESO) at the La Silla Observatory in Chile. The campaign has confirmed the high stability and precision of the LFC system, and this brings out its true potential for astronomical spectróscopy at high spectral resolution, offering an ideal instrument for the search for exoplanets similar to the Earth. 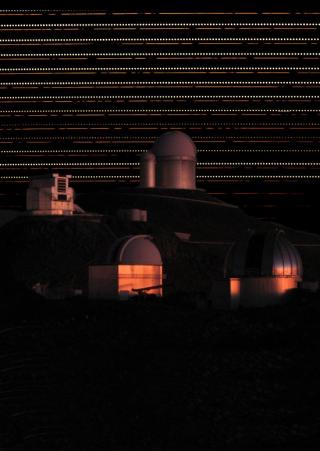